Some may be familiar with the woo magazine, Atlantis Rising, but for those who are not, allow me to offer a brief introduction. 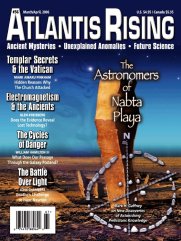 Atlantis Rising is a  popular magazine among mystery-mongers and significance-junkies that attempts to appeal to human curiosity as a weakness. Curiosity, of course, is generally a positive attribute in humanity, the cat notwithstanding, but AR seeks to exploit this character in such a way that the incredible is presented as probable. Often the authors of articles with topics like Atlantis, UFOs, and various supernatural and paranormal themes present spurious evidences or fail to consider alternate evidences that contradict the more sensational, woo-woo claim.

One such theme is the continued speculation that humans have a history that exceeds the currently accepted range of 150-200 thousand years. “Accepted” because of overwhelming physical evidence that has been consistent and predictable. Undoubtedly this would be a point that a significance-junkie or mystery-monger would happily zero in on: accusations of the establishment‘s reliance on predictable data and exclusion of anomalies is a common but fallacious criticism. They speculate on the exaggerated antiquity of man because this is an assumption that is necessary to support their claims of super-civilizations like Atlantis and Lemuria; and because of the romance that comes with the significance and the mystery of it all.

A recent issue of AR (March/April 2006) included an article on the Nabta Playa, by Mark Gaffney, and another on alleged human footprints in the ancient volcanic ash of the Valsequillo Basin of Mexico, by Michael Cremo. Gaffney is the author of Gnostic Secrets of the Naassenes that thinks Charles Hapgood is an “original and brilliant thinker” and that Hapgood’s pseudoscience is “essential reading ( Amazon.com 2006).” Cremo is the author of Forbidden Archaeology, a text of pseudo-academia that used out-of-context quotes mined from legitimate sources to paint a picture of human antiquity and accomplishment that exceeds what is truly evident.

In this post, we’ll examine the Nabta Playa.  I’ll get to cover the ‘footprints’ of Valsequillo in another.

Nabta Playa is the name of a site discovered in 1972 by Fred Wendorf of Southern Methodist University. One of the primary features is a calendar circle of stones used by Neolithic farmers to anticipate the winter and summer solstices. Artifacts dated absolutely by radiocarbon and relatively through seriation gave dates consistent with the Neolithic period. Despite the derision of Wendorf’s two-volume Holocene Settlement of the Egyptian Sahara, which Gaffney refers to as an interesting read with few answers,” we’re able to see an evolution of monumental architecture from an early point. The placement of the stones at Nabta Playa reveals the ability of neolithic residents of upper Egypt to organize and manage public architectural products. Public architecture in antiquity didn’t’ occur without a need, either real or perceived. In the case of Nabta Playa, the real need may have been to aid in planting and harvesting crops. There may even have been a perceived need for ritualistic cult purposes.

Gaffney’s main interest in the Nabta Playa appears to be as “evidence of great antiquity,” which he ultimately implies is an advanced civilization that can measure star velocities, distances, masses and positions of their planets at a period over 19,000 years ago! People in the region isn’t entirely implausible in and of itself, but the technologies of these people were limited and, until almost 9,000 years ago, they didn’t even have pottery. In the neighboring Levant, the period between 11,500-10,300 years ago is considered the Pre-Pottery Neolithic A (PPNA). Pre-pottery.

Gaffney cites Brophy (2005) in support of the “ancient advanced civilization” speculation and reports that Brophy concludes the stones scattered on the Nabta Playa represent information of the masses, distances, velocities, and locations of stars other than our sun. I’ve yet to read The Origin Map, but if Gaffney is correctly reporting its contents, it would seem there are some major problems with Brophy’s scholarship. I have read Brophy’s work in Mediterranean Archaeology and Archaeometry (Brophy and Rosen 2005), in which there is no mention of star velocities, companion stars and knowledge that couldn’t be reasonably expected in a pre-pottery neolithic culture.

And that really is a point that cannot be made more strongly: pre-pottery neolithic. Human culture has a very consistent progression in the archaeological record. In the Near East, pottery was a technology first developed during the Neolithic. It’s certain that other, less durable, technologies were long in existence, such as leather working, weaving, and, most certainly, stone tool making. Of these, only the stone tool industries are durable enough to survive. Leathers, cloths, woven plant materials, modified gourds and such simply don’t last, though there are some indirect evidences of these technologies to be found in later pottery styles that look like gourds or have functional features that might be found on leather pouches. There are also woven patterns impressed into clay or dirt or left as residue on rock that give hint to the technologies of weaving and cloth. Microlithics can reveal early agricultural efforts through analysis of striations called silica-glass on lunates, small, half-moon shaped lithics that can be used as a series of “teeth” affixed to a branch or, more likely, an antler to create a sickle.

Nowhere in the archaeological record, however, is there any evidence that neolithic peoples were able to measure and record the electromagnetic spectrum of a star to determine its redshift, nor are there any fossil interferometers discovered in the neolithic for determining the sizes of stars. Also not indicated is the mathematical skills needed to calculate stellar mass. Mathematical skill requires writing and writing wouldn’t be invented for a few thousand more years, well after pottery.

Brophy believes information about the relative velocities of stars, and their mases, may also be encoded in the placements [of the stones at Nabta Playa]. And he thinks that smaller companion stones lying near the base of some of the large megaliths probably represent companion stars, or even planetary systems. Unfortunately, this cannot be tested at present because astronomy is not yet able to observe earth-sized planets across the reaches of space.

His implication is clear: there existed a civilization that was somehow more advanced than modern man yet unable to provide any durable artifacts. No metals, no ceramics and no glassware exist for this fictional civilization. Their stones and their bones as well as the bones of their cattle remain, but nothing that suggests that there existed anything other than a civilization whose most advanced technologies included microlithic stonework, a skill to be sure. For all intents and purposes, the people of this civilization were novice at agriculture and the stones they put into place at Nabta Playa were used to mark solstices and provide ritual use. According to Gaffney, Brophy has plotted stones outside of the circle which he claims represent on-the-ground analogs of star positions from up to 19,000 years ago. In the Mediterranean Archaeology and Archaeometry article, Brophy and Rosen conclude the megaliths may have been constructed “more than 8,000 years ago.”6,000 to 7,000 BCE isn’t an unreasonable date to expect for the inhabitants to devise ritual and functional methods of anticipating the rainy seasons which followed the solstice as rains became increasingly erratic. The people of the Nabta Playa region developed pottery at around 8800 years ago and domesticated ovicaprids and perhaps bovids at around 8100 years ago. But at 17,700 BCE, about 19,700 years ago, the region was still arid, perhaps more arid than it is today (Wendorf and Schild 2000). There would have been no reason to care about the solstice or positions of the stars as there was no agriculture and probably no one willing to inhabit the desert.

One is left to wonder why, if Brophy wrote The Origin Map in 2002, why doesn’t he reassert his claims in Satellite Imagery, which was submitted for publication in peer review a full two years later? Moreover, if the assertions in The Origin Map are solidly evidenced, why doesn’t he cite it as a scholarly source in the journal of his peers? Could it be that even Brophy realizes his work is fringe at best, kooky at worst?

Note: This article was updated and refreshed from one originally written in July 2006. My plan is to refresh a few articles about the “Exaggeration of the Antiquity of Man” and add to the series.