Pseudo-artifacts and gift ideas for the skeptic archaeologist (or that family member that you can’t stop watching Ancient Aliens every Friday night). These are genuine fake, fraudulent, or misrepresented artifacts that you might recognize. I’ve written about a few in the past and most are available on Amazon. I came across one or two, and started thinking it would be fun to have a some on a curiosity shelf some day.

This was mostly a fun post I threw together, but if it’s liked maybe I’ll do a list of cool replicas of real artifacts. The kind you put on the other curiosity shelf!

$28.00 + Shipping
Each comes with a numbered certificate and jewelry box or velvet bag.
24k gold plate.
The description reads “Perfect for airline crews and ancient aliens theory fans and believers.”

The Quimbaya culture of Columbia produced these tiny little, solid gold figures of all sorts of animal life they observed: lizards, frogs, butterflies, jaguars, and even insects, fish, and birds, which this is one of. The ancient aliens crowd confuses this tiny creature with proof that people over 800 years ago must have had jet planes! Read an article I wrote a couple years ago for details.

$40.00
Find it for sale here, at this online Mormon bookstore.

The Newark Holy Stone is one of several artifacts hoaxed back in the 19th century in Ohio probably as a means of furthering Mormon doctrine. It was demonstrated a hoax by specialists in linguistics and language that identified the alleged “ancient script” as definitively modern–created by someone who knew no better. Oh, it’s even sold by a Mormon bookstore! They still like pushing this one! 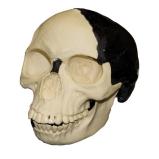 $255
at Skulls Unlimited
But also at Bone Clones

Piltdown Man was one of the earliest archaeological hoaxes and probably meant to fulfill the desire for there to be an early hominid in Britain. Or the status and notoriety of one ore more people. Or both. Interestingly, it went about 41 years before being discovered as a hoax, forged by creating a composite of a mandible from an orangutan with the cranium of a human.

$16.50
This 4.2 x 2 x 3 inches and 12 ounce Resin Skull is reminiscent of crystal skulls like the Mitchell Hedges and others.

As pseudo-artifacts go, crystal skulls are probably the epitome. I wrote a blog article a while back that provides some clarity about crystal skulls, their origins, and their veracity. They’re not really what they’re claimed to be, but the ones made out of quartz crystal are still pretty cool.

There are about a dozen or so alleged “crystal skulls” that are said to be of Mesoamerican origin and have “mystical powers.” But none have every been properly documented as actually having been excavated or recovered from an actual archaeological site. There simply is no provenience or any example of these types of skulls in the Mesoamerican archaeological record.

$90.00 + Free Shipping.
Gold-finish and standing at 7″ tall
Made from polyresin

Okay, so this one isn’t really an artifact that has any claims surrounding it that I’m aware of. But it is a replica of the very one that Indy tries to steal from a tomb in the first Indiana Jones movie. In the film, he’s seen swapping the idol for a bag of sand so as not to set off the booby traps. It almost works!

$120 + $26.00 shipping!
6 X 3 Feet with Free Book
This is a Signed Numbered Limited Edition Collectible
This Full Body item is 3 Feet Wide x 6 Foot Tall Printed on Linen
This is Secundo Pia’s Famous 1898 Image You get a Free 145 Page Book about the Shroud with purchase
The Shroud is the most famous Relic in Christianity

The Shroud of Turin has been proved fake many times. In fact, it was demonstrated years ago to be a 19th century fake. The “blood stains” are nothing more than pigment.

$7.06 + Free Shipping.
Ships quickly and safely in a sturdy protective tube.
Decorate your walls with this brand new poster.

Number 7 was just too expensive for the archaeological skeptic serious about his or her Shroud materials but still on that college budget. So I offer the poster above instead. This tasteful representation of a distasteful forgery will give you dozens of seconds of appreciation.

If you’re an Indiana Jones collector (and what skeptical archaeologist isn’t?), then you’ll definitely want a grail cup to sip from on occasion while admiring that golden idol of Number 5!

10. Gladiator’s Sword of Pompeii as seen on The Curse of Oak Island!

I linked this one a few days ago, but its such a central “artifact” of pseudoarchaeological lore in the last few years that it would be irresponsible not to list it with the rest of these once-in-a-life-time (or for as long as you have a Prime account) gift ideas for the skeptic. The sword featured on Oak Island might have even come from the Design Toscano company this century, but it was shown to have a zinc content well over 33% so it had to be manufactured after about the mid-1800s. Some refuse to accept this finding. Can you believe it? Read more about the science behind this sword in an article I wrote last year.

$51.00
Each napkin measures 20″x20″ and will be a wonderful addition to the table for that dinner party for your skeptical archaeologist friends. Give an extra slice of desert to the first person to make the connection to the Ica Stones!

The Ica Stones are a good example of fraudulent pseudoarchaeology in which the locals are attempting to “manufacture” artifacts they can then sell to unsuspecting tourists (or even legitimate researchers) who want to purchase “antiquities” to “sneak back home” from their trips to South America. They featured little images of dinosaurs and are likely an immediate hit to small children. 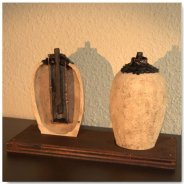 The Baghdad “battery” was very likely not a battery at all, or a means to store energy for use as lights or any other purpose. Instead, it was probably a storage jar for hand-written scrolls that would be wound around the central element which proponents of the “battery” idea call an anode. Experimental tests did show that if the right fluid was used along with the right rod in the center, it could generate a very, very weak current. Such a current might have been used as a way to electroplate small objects like jewelry.