The fourth Indiana Jones movie featured a “Crystal Skull” right in the title, later to appear in the movie as a key element. This isn’t the first time a crystal skull was part of the fictional narrative of a film or television show. At least one episode of Stargate SG-1, arguably one of the best science fiction shows to find its way to the small screen, had a crystal skull from Mesoamerica that was central to the plot. An episode of the 1980s A-Team was titled “The Crystal Skull,” and a B-movie released in 2014 that almost no one heard of was called “Crystal Skulls.” These translucent cranial representations have also found their way into other aspects of popular culture, including video games and a particular brand of vodka called Crystal Head, which was directly inspired by the supposed archaeological finds.

So what are these crystal skulls? Are they real and and do they tell us anything about the cultures they’re supposed to represent?

They are real in that they are generally intricate representations of human skulls that are produced by carving clear or milky white quartz. The general claim for these skulls is that they are pre-Columbian in age. That is to say, they are alleged to be artifacts that date to a period prior to 1492, the year Columbus arrived in the Americas. There are at least four skulls that are frequently banded about by new-agers and believers in alternative histories.

Mitchell-Hedges Skull (a.k.a. the Skull of Doom) 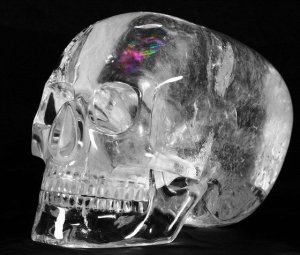 The most famous of the crystal skulls is one called the “Mitchell-Hedges” skull, named after Anna Mitchell-Hedges. She is the person alleged to have discovered the skull in Lubaantun, Belize in 1924 or perhaps 1927. Then called British Honduras, it was a favored destination of her father, F.A. Mitchell-Hedges, a British adventurer who excavated a temple at Lubaatun. Anna claimed to find the skull under a collapsed altar when she was 17 and accompanying her father on one of his adventures. But her claims about it started after the 1940s and no record of the skull being found in her father’s records of Lubaatun exist. There are, however, records of the skull being purchased in an auction at Southeby’s in 1943 by F.A. Mitchell-Hedges from Sydney Burney, a British art and antiquities dealer. And, indeed, the skull is mentioned being owned by Burney in the British journal of anthropology, Man. Anna maintained to her death in 2007, however, that Burney was supposed to hold it for safe-keeping only to put it up for auction, forcing her father to purchase it back for £400.

But examinations of the skull itself suggests otherwise. This skull was often called the “Skull of Doom,” because it was alleged by Mitchell-Hedges to be over 3,600 years old and once the property of a Mayan high priest that could “will the death” of others through the magic of the skull. The Mitchell-Hedges skull did find itself scientifically examined more than once. Carved from a single piece of clear quartz crystal, the skull is about 5 inches chin-to-top, 5 inches ear-to-ear, and about 7 inches nose to back. The lower jaw, or mandible, is detached. An art restorer by the name of Frank Dorland had possession of the skull in the 1970s and he noted that the only place he could locate any tell-tale scratch marks were the teeth, where he noted mechanical grinding was obvious. During the time that Dorland had the skull, Richard Garvin was able to also examine it, and confirmed that it was made from a single quartz crystal (Dorland thought it was a composite). After Anna’s death, Bill Homann, her husband, allowed Jane MacLaren Walsh of the Smithsonian’s National Museum of Natural History to examine the skull. Using a scanning electron microscope (SEM), she was able to see evidence that a high-speed rotary tool, probably coated with industrial grade diamond abrasive, was used to carve the skull. Finally, forensic artist Gloria Nusse used the same facial reconstruction techniques that forensic scientists use to reconstruct a likeness of unknown victims from their skulls. What she revealed was what appeared to be a female with European facial features, indicating that the Mitchell-Hedges skull was probably created using an actual human skull as a model. A skull from Europe. This, along with the modern tool marks would seem to be consistent with a 19th or early 20th century artifact.

Perhaps the oldest of the crystal skulls, the British Museum Skull 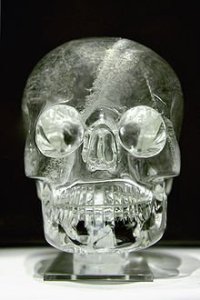 was purchased by it’s namesake institution in 1897 with the belief that it was a pre-Columbian artifact from Mesoamerica. First appearing in 1881 in a Paris antique shop, where the owner, Eugène Boban, tried to sell it to the national museum of Mexico, it eventually sold in New York to George Sisson. There it was briefly exhibited in 1887 by George F. Kunz to the American Association for the Advancement of Science before it sold at auction to Tiffany and Co. prior its final sale to the British Museum. Kunz probably never actually owned the skull directly, but as the Vice President of Tiffany’s, he was in a position to broker the ownership from Sisson to Tiffany’s then to the British Museum, a process that took a little over a decade. In addition to being the VP of Tiffany’s, Kunz wrote to Charles Hercules Read, Keeper of the Department of British & Medieval Antiquities & Ethnography for the British Museum. In his letter, Kunz made a compelling recommendation for the skull’s purchase and provided a provenance published in the American book Gems and Precious Stones of North America.. The author of the description in this book said the skull “was brought from Mexico by a Spanish officer sometime before the French occupation of Mexico, and was sold to an English collector, at whose death it passed into the hands of E. Boban, of Paris, and then became the property of Mr. Sisson.”

At this point the story of the British Museum Skull begins to unravel in a way that can remind you of when Velma pulled the mask off the bad guy in the old Scooby Do cartoons. The author of the book, Gems and Precious Stones of North America? George Frederick Kunz, who, in addition to being VP for Tiffany’s was also an accomplished mineralogist of some renown.. It was published in 1890, several years after Tiffany’s purchased the item from Sisson. Prior to this publication, no known provenance is documented. Kunz clearly wanted the skull to be known, perhaps showing it at the meeting of the AAAS was a way to gauge a willingness to accept the artifact as genuine and, passing this, it was picked up by Tiffany’s. Next step, backstop a history for the artifact, let it fertilize for a few years, then pique the interest of the British Museum.

The physical aspects of the skull are, in many ways, what you might expect in that it was generally life-size at 6 inches chin-to-top, about 5 inches ear-to-ear, and just over 8 inches nose-to-back. Careful examination of the skull in 2007 showed inclusions of tiny, green crystals, revealed by microscopic analysis which turned out to be iron-rich chlorites that indicate the source of the crystal to be one of 3 places: Brazil, Madagascar, or the European Alps. Also, evidence of rotary tool-work with metal drills and harder than quartz abrasives like emery or corundum. The skull is a single piece rather than with a detachable mandible like with the Mitchell-Hedges skull. 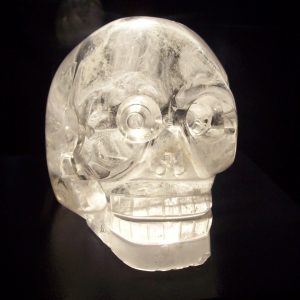 This skull was also once owned by Eugène Boban, the Paris antiques dealer that originally handled the British Museum Skull. Boban sold it along with two other, smaller, skulls to Alphonse Pinart. It ultimately found its way to the relatively new Musée du Quai Branly, a museum in Paris, France that features the art and culture of indigenous populations around the world. The Musée du Quai Branly commissioned a series of interesting scientific tests on the skull, which is about 4 inches chin-to-top. First, engineers from Centre de recherche et de restauration des musées de France (Center for Research and Restoration of the Museums in France) gave it a good look and concluded that it couldn’t be pre-Columbian because of the distinct use of modern, steel tools used to shape and polish the artifact which left behind tell-tale traces. Next, a particle accelerator was used, which was able to date traces of water within the skull to the 19th century. 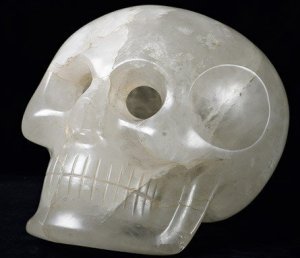 The Smithsonian Skull is one that has been described as “sketchy,” as if writing a book describing the skull you want to sell then recommending the book to a potential buyer as proof your skull is on the up and up isn’t sketchy! But the Smithsonian Skull is one that wasn’t bought by the current owner. It was mailed anonymously to the Museum in July 1992. This skull is 15 inches chin-to-top, larger than British and Paris Skulls, and very different in another way: it is hollow inside, a feature the other skulls lack. The donor claimed it to be “Aztec” and formerly owned by Mexican dictator Porfirio Diaz. Examination of this skull revealed some faint traces of tool marks in two basic types. The first being “fine, parallel striations” that are curvilinear and show signs of being used with abrasives and rotary wheels or pads. The second tool type left “courser, single striations.” These were also curvilinear but show up randomly oriented on the surface of the skull. Within a small cavity of the quartz matrix of the skull, a much smaller deposit of black and red material was preserved from the grinding. Using X-ray Powder Diffraction (XRD), a method of identifying crystalline substances, the material was identified as silicon carbide, also called carborundum. Natural deposits of this mineral are rare and nearly always found in meteorites. Because it was at the end of the 19th century when carborundum was first synthesized, it seems pretty clear that the Smithsonian Skull could not have been carved until probably the early 20th century when carborundum was commonly available for lapidary work.

There are, perhaps, a dozen or more known crystal skulls that are claimed to be ancient, these are four that are in the hands of museums. The other nine or so known skulls and however many unknown ones that exist are all in the hands of private collectors. But they all share something notable in common: absolutely none of them have a provenience that puts them in an actual archaeological excavation where they are properly documented with their original contexts. In fact, while they are generally given some Mesoamerican origin, they do not fit the style of other Mesoamerican depictions of skulls. And, with the four described above, the common claims that they are “cut with lasers” or “laser-like precision” or cut using “high technology” of a “forgotten civilization” are simply wrong. It’s easy to want a wonderful mystery about super-civilizations of the past or alien influences on early cultures, but when it comes to crystal skulls, the answer is closer to home. They were probably created by modern people for profit or notoriety.