In two other parts in this series, I posted about the exaggerated antiquity of Man in which proponents suggest that modern humans (Homo sapiens), have existed in present form for millions of years. Some of these proponents even suggest that, because of this, advanced civilizations once existed in the Earth’s past. This exaggerated antiquity of Man lends itself well to fantasies about Atlantis, Mu, and Lemuria as well as others.

In the second part of the Forbidden Archaeology? series, I mentioned Michael Cremo’s article in Atlantis Rising about his recent visit to the Sterkfontein archaeological site. Cremo is also the co-author of a book called Forbidden Archaeology in which he presents much of his speculation about the antiquity of Man and in this he has a section on the Laetoli footprints, which I found excerpted on the Internet. I’ll try not to spend much time on this since others have done a far better job than I could ever do in picking Cremo and Thompson apart on their book. The reason I’m mentioning it at all is because Cremo is still suggesting in his Atlantis Rising column that modern humans lived millions of years ago.

The Laetoli Footprints According to Cremo

One of the things that first caught my attention in reading the excerpt of Forbidden Archaeology’s chapter on the Laetoli footprints was this:

Readers who have accompanied us this far in our intellectual journey will have little difficulty in recognizing the Laetoli foot prints as potential evidence for the presence of anatomically modern human beings over 3.6 million years ago in Africa. […] What amazed us most was that scientists of worldwide reputation, the best in their profession, could look at these footprints, describe their humanlike features, and remain completely oblivious to the possibility that the creatures that made them might have been as humanlike as ourselves.

As tempting as it is to offer a witticism about or deride the “intellectual journey” part, I’ll abstain. My criticism instead will focus on the credulous nature of Cremo and Thompson as well as their inability to separate “humanlike” from “human.” What we know from australopithecine post-cranial remains is that they were erect and had a bipedal locomotion that may or may not have resembled that of modern humans (Marchal 2003). As far as I’m aware, the only remains found that date to the period of the prints is that of Australopithicus afarensis. Cremo and Thompson seem to have an affinity with quoting R.H. Tuttle who stated, and I’m paraphrasing, that had the ash been dated to a younger age, most scientists would have little problem assigning them “to Homo.” What’s important to note here the point which Cremo and Thompson are a bit deceptive about: Tuttle is referring to the genus Homo not the species Homo sapiens.

Cremo and Thompson also discuss Tim White’s experimental analysis of a reconstructed A. afarensis foot, which fit one of the Laetoli prints better than either human or chimpanzee. They’re critical of White’s reconstruction method, in which he used Homo habilis parts to fill in for the missing afarensis ones, since a complete afarensis foot wasn’t known. However, it occurs to me that if a habilis/afarensis hybrid works better than either a human or chimpanzee foot at the same scale, perhaps it wasn’t an out-of-place human. And it blows a hole in Cremo’s speculation to recognize the fact that ‘anatomically modern humans’ are very recent in the fossil record, perhaps up to 200,000-300,000 years ago, while australopithecines do exist at around 5-2 million years ago, followed by habilis at around 2.4 million years ago.

Interestingly, new information about Australopithecus afarensis published in Science Advances (DeSilva et al 2018) shows, after analyzing a nearly complete foot of a juvenile A. afarensis (DIK-1-1f), that while the subadult of the species was probably fully bipedal, it also had features that gave it increased hallucal mobility—it was capable of efficient grasping with its big toe which might have aided in climbing trees or hanging on to a parent. This is a feature that would become less apparent with age.

For those that have followed Cremo’s “work,” they understand that his speculations of exaggerated antiquity of man are based upon his particular brand of creationism. Cremo adheres to the Vedic mythology rather than the Judeo-Christian one that permeates the creation arguments of most in the United States.

In the March/April 2006 issue of Atlantis Rising, Cremo wrote a brief article about the footprints found in volcanic ash near Valsequillo, Mexico in the bed of an ancient lake. One report places the strata that the alleged prints are in at over 40,000 years old (Gonzalez 2006) and another 1.3 million years old (Renne 2005)!

It’s possible, albeit not probable for hominids to have left foot prints 40,000 years ago in Central America. What’s more probable is that the dating methods are flawed or that the prints weren’t hominid at all since there is no other evidence to suggest that humans were able to reach this hemisphere by that time. After all, this was about the time humans were just starting to reach Australia and replace or assimilate Neanderthals in Europe. Moreover, 40,000 years ago was in one of the coldest phases of the Wisconsin glaciation which began at about 70,000 years ago and ended around 10,000 years ago.

Gonzalez’s speculation is that an early boat faring culture made their way to the Americas more than 40,000 years ago. This might have been how early humans made the relatively short jaunt to Australia from South East Asia and the Malaysian Islands, but there’s a lot of open sea between South America and Asia. The notion is romantic, but it’ll take more than some anomalous marks in volcanic strata for this to rise above anything but speculation.

Cremo says in his column that he believes the tracks to be 1.3 million years old and human, but one must give him credit since he does acknowledge other possibilities.

These prints have been interpreted as “human” (Gonzalez et al 2006) where they write: 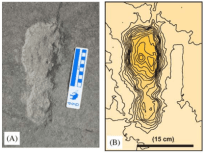 [They have a] non-divergent great toe, deep heel and ball impressions, lateral toes do not project beyond the big toe, where present, toes 2–4 made small, nearly circular pad impressions when flexed to grip the ground, occasionally, medial longitudinal pedal arches can be recognized foot indices fall within a range of values (67 populations used) for modern Homo sapiens with relatively broad feet.

But the 40,000 year date is challenged by Paul Renne and his team (2005) who performed both argon-argon dating and paleomagnetic analysis, which both yielded dates of 1.3 million years ago. To be fair, Cremo mentions this in his column, but the significance to him has the opposite effect. For the reasoned mind, this implies that the prints probably aren’t hominid after all if the date is correct. To the significance-junkie, however, this implies that hominids were populating Central America 1.3 million years ago.

Finally, two of the authors of the original paper on the Valsequillo Basin footprints, including the lead author, joined with two others (Morse, Bennett, Gonzalez, & Huddart 2010) to argue that the Valsequillo prints should be removed as evidence for 40,000 year old hominids in the Americas. They conclude:

The depth of a footprint reflects two variables, plantar pressure and impulse. This consequently leaves a distinctive pattern with depth concentrated either in the heel or metatarsal areas. This occurs irrespective of substrate and appears consistently over a range of different hominin species. Consequently, this can be used to assess a potential population of human footprints and is the basis for the statistical technique developed here. While this statistical method alone cannot discount a footprint population as being made by human feet, it can when combined with the absence of well-defined trails and the lack of a coherent assemblage of trace fossils. This approach has been applied to the Valsequillo Footprints which do not appear to have been made by human footfall. Trails are poorly developed at best with no unequivocal evidence for animal prints. We therefore suggest that these marks find their origin in modern quarrying activities.

Interestingly enough, there’s been a find of fossil footprints at Cuatro Cienegas, Mexico that are dated to more than 10,000 years old—a date that fits better with evidence already collected about human presence in the Americas. And these footprints look like footprints. Even the prints in Laetoli, at over 3.6 million years of age still look like human footprints. Over 200 prints were found near Valsequillo, of which 60% are alleged to be hominid (Gonzalez 2006), only a handful appears to resemble hominid prints. Each of the Cuatro Cienegas prints is about 25.4 cm long, just a bit larger than the average print found at Valsequillo. The Laetoli prints average about 19 cm. The feet of H. habilis and H. erectus, the hominids that lived at about 1.3 million years ago, are a bit longer than afarensis of Laetoli, but significantly smaller than that of modern humans. If the prints were hominid and could be dated to 1.3 million years ago, wouldn’t we expect them to be significantly smaller in length than that of modern humans?

This question is what lead Cremo to conclude that modern humans thrived millions of years ago, rather than settle for the more parsimonious explanations that either the dating is flawed or the marks aren’t hominid prints. As it turned out, the latter of these two explanations was the more likely.

Note: This article was originally published in November 2006, but I’ve refreshed and updated it with the intent of adding to this series in the near future.