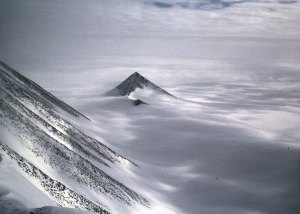 A few years ago, the Antarctic pyramid made its way around the internet with grandiose claims of “ancient civilizations” with “high technology” on the one continent where populations of people simply never existed until modern times (and only for short stays at research stations). And that tall tale seems to be making its rounds again so a friend suggested I write a little about it.

The photos show a mountain with very triangular features that rival even that of hoaxster Semir Osmanigic’s so-called “Bosnian” pyramid.

And this is no more a man-made pyramid than the hill in Bosnia.

What it is, however, is some cool geology called a faceted spur. Typically, there’s more than one of these and they’re associated with faulting and tectonic activity combined with erosion. They can occur when uplifted rock layers erode with drainages that create the spurs that terminate at the fault scarp, usually parallel to the resulting facet in the valley below. Additional erosion that leaves behind the harder, erosion resistant layers of rock can also create triangular facets. These are called flat irons. The erosion in Antarctica would likely be due to glacial activity passing between the peaks, carving out the rock, leaving behind some interesting geometric shapes.

In some cases, a hogback ridge–that is to say a ridge line that has eroded it’s midsection to leave two dip slopes (on the outside) and two scarp slopes (on the inside)–will also produce a series of flatiron features. I’ve included a sketch that shows what I mean.

The results are often some very triangular and, occasionally, some pyramidal shapes. The hill near Visoko, Bosnia (the so-called “Bosnian pyramid”) is one such geologic result of the faceted spur process. And the mountain in Antarctica is another example–even more like a pyramid–that might be a combination of a faceted spur and flat iron. But notice a couple things about this polar formation: there’s a small faceted spur at its base; and it’s part of a ridge chain that includes other faceted spurs. So whether or not the peak is a flatiron, it’s clear that faceted spurs are not uncommon in the Heritage Range of the Ellsworth Mountains of Antarctica. 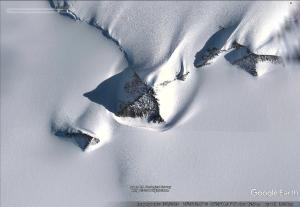 Just to wrap this “mystery” up, the Antarctic pyramid-like peak in question is named Lippert Peak, after George E. LIppert, a biologist that worked at Palmer Station in 1965. It reaches an altitude of 4,133 feet and if you want to look for it in Google Earth, just input a latitude of 79.98333 south and a longitude of 81.93333 west.

My undergraduate minor was in geology, so if any of my geologist friends would like to add to or correct my observations explanations of these features, feel free. I’m way out of “practice” and could use a good schooling I’m sure. I’ve tried to keep the jargon to a minimum and the explanation as basic as possible so I may have been less than concise or complete as I could have been.