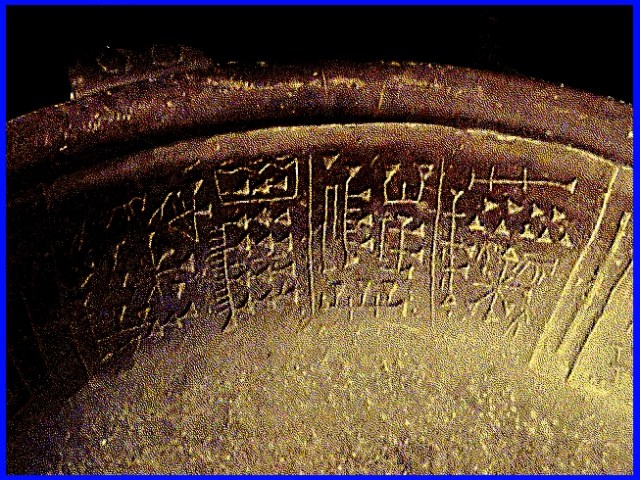 I subscribe to a lot of archaeology related feeds on social media and one of the memes going around last week included one with the title, “3 ‘Forbidden Archaeology’ Discoveries That Will Rock Your Boat.” Let me set the record straight: it’s hard to rock a boat that already sank.

First of the three was something called the Fuente Magna Bowl, a stone bowl that surfaced in the 1950s with both South American motifs and, what is alleged, to be Sumerian text.

Such an artifact would be very significant and among the most note-worthy finds of the human past if: 1) it could be dated to a pre-Columbian period; and 2) the writing was genuinely Sumerian.

Both of these conditions are necessary. One without the other is not sufficient to say this object genuinely represents a formal link between ancient Sumerian and Bolivian cultures, which is the claim of mystery-mongers and significance-junkies that have rediscovered this “artifact” of late. I say “rediscovered” because it simply held no fascination among scholars when it first turned up in the 1950s. It lacked provenience even then. Dating it is simply out of the question. It’s apparently made of stone. Without organic components (like an organic pigment or a charred surface), there isn’t anything to test. We can date the stone -but that would give a date of millions of years which was when the stone was formed. Not when it was carved. Had there been a context that could have been preserved, relative dating might have been possible on something within the same strata.

So is it a genuine Sumerian text? No credible scholar I could find thinks so. The only person that seems to have attempted translation is Clyde Winters (but there may be others -I didn’t spend a huge amount of time on this), a pseudo-historian known for his Afrocentrist hypotheses. But lets assume that the script is indeed cuneiform. And lets assume that this cuneiform script is in an early Sumerian language (Winters calls the script “proto-Sumerian,” which is a term that has some meaning but it does not resemble proto-Sumerian to me).

If those assumptions hold, then we still have the problem with the date. When was this bowl carved. All we really know is that it began to exist around the 1950s. It would not be difficult for a well-read forger to create it and plant it for “discovery.” And this, my friends, is the most parsimonious explanation. A hoax.

Think about what’s involved. If there were indeed Sumerians visiting and even settling Bolivia before 2000 BCE, then where is their culture. You can plant a few artifacts, but forging a settlement -and entire culture is something else. Which is why we don’t see it. There should be plenty of artifacts and features that point to a Sumerian way of life -from their unique and innovative methods of city planning, to their religious iconography. Instead, we have a bowl. A. Bowl.

Some might ask “why would anyone go to such lengths to create such a hoax?” But there truly are any number of answers to this, not the least of which includes notoriety, fame, attention, publicity,