Elongated skulls of ancient people like the Peruvians have long been a source of mystery and fascination, particularly for significance-junkies that find aliens wherever they can. The last Indiana Jones movie didn’t help matters either.

Along that line, somebody sent me a link to a website that has a different view of cranial deformation than that of science knowing that I’ve previously written on the topic and wondered what I thought. So I thought I’d share my views for all to see.

The website is www.ancient-origins.net and the conclusions drawn by the author’s observations and assumptions have to be inferred since the stated conclusions make little sense. The author of the post concludes, “Given that there are at least two mummies containing foetuses with elongated skulls, in addition to hundreds of infant and children with elongated crania, a priority task for the academic community would be to identify the physical location of the mummies and proceed to DNA analysis…”

Three things in this conclusion should stand out: 1) that the author expects others to find specimens that may or may not exist; 2) that the author thinks DNA analysis should be done; 3) that the conclusions are based largely on evidence that doesn’t exist (the missing fetus mummies).

Clearly, what the author is suggesting is that some other species is the reason for elongated skulls in human populations rather than mechanical deformation practices that actually still go on in some societies even today. The author doesn’t come out and say this directly, but it is the implication.

The title of the article itself, is “Elongated Skulls in utero: A Farewell to the Artificial Cranial Deformation Paradigm?”

I like how he places a question mark at the end. So, the answer to that question, then, is “no.” Not hardly.

The chief arguments the author presents against mechanical and intentional cranial deformation of skulls like those of the Peruvian specimens in the Morton Collection at the University of Pennsylvania are: 1) there exist examples of elongated skulls in fetuses of mummified remains -of which there are only some drawings from the 19th century to support- and, 2) infant skulls show signs of elongation at an age too early for their skulls to deform mechanically. Of the skull images the author includes in the post, the only one that wasn’t an adult was specimen #496 of the Morton Collection shown here: 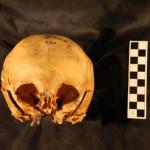 This is of a five year old Peruvian child, sex unknown, noted by Morton as “cradle boarded,” meaning that he believed the mother bound the child’s head against a cradle board (Morton Collection). This child’s age is consistent with intentional, mechanical head-shaping. The majority of cranial growth and development occurs before age 6. By age 5, significant deformation of a child’s skull is done by use of bindings and cradle boards for those societies that practiced it. Even in the first few months of infancy, children who have their cranial vaults manipulated will show drastic change (Tiesler 2014, pp. 35-39).

The elongated skulls of alleged mummified fetus specimens obviously cannot even be considered without the full data these alleged specimens could provide (provenience, metrics, dating, etc.), particularly since the only mentions of them are from 19th century writings and drawings.

This, it should be noted, is a hallmark of pseudoarchaeological approaches to evidence. Whenever we see heavy reference made to physical evidence that is no longer available (ostensibly because it is either lost or being suppressed by “mainstream” archaeologists), then a red flag should be thrown down. Infants with cranial deformation are easily explained -their parents bound their heads. Fetuses don’t seem to exist. Nothing to explain. There are, however, some explanations that might satisfy why a fetal skeleton has an elongated or misshapen skull -several cephalic disorders such as scaphocephaly or dolichocephaly are among a dozen or so possibilities. Interestingly enough, one of the images shown in the pseudoscience article in question is captioned as that of a fetus, but the skeleton (a drawing) is not shown in a womb, rather in a position characteristic of an Andean mummy, positioned in ritual manner consistent with Andean funerary practices.

What would be a more parsimonious explanation for elongated infant skulls? Artificial cranial deformation by parents in societies for which we have physical evidence that it was done (figurines with bindings and actual cradle boards); or that homo sapiens mated with another species that had naturally elongated heads?

Tiesler, Vera (2014). The Bioarchaeology of Artificial Cranial Modifications New Approaches to Head Shaping and its Meanings in Pre-Columbian Mesoamerica and Beyond. New York: Springer.