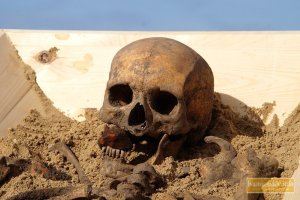 But the folks of Kamien Pomorski in northwestern Poland thought so in the 16th century.

Find the story and at least one more photo at Kamienski.info.

The bones aren’t of a real vampire, of course, but the belief in vampires was a very real phenomenon in 16th century Europe. Probable origins of the belief include the nature of corpses as the go through early stages of decay. The skin tightens and shrinks, giving the appearance of beard growth or growing fingernails. It isn’t the hair or nails that grow out, rather the skin that recedes, exposing hair in the follicles or more fingernail.

If this sort of thing interests you, I recommend my review of Vampire Forensics, by Mark Collins Jenkins (2011). Jenkins outlines what he learned of “vampire outbreaks” and interweaves science with history and mythology to explain the phenomenon across several cultures in time and space.

The Polish “vampire” above was buried with a rock wedged in its mouth, much the same way another, more recent, “vampire” was interred in Venice, Italy as a means to prevent the dead from chewing. The Polish vamp was also staked through the…. leg. Not the heart -the leg. Ostensibly to hobble or cripple the would-be monster.

We laugh now, but to the people of 16th century Poland, vampirism was no joke and taken very seriously.