I’ve been a regular user of both Android and Apple’s iPhone for the last couple of years and I’ve found one, single application on the iPhone that I absolutely love over the Android equivalent. And that’s Theodolite. There is what amounts to an inferior knock-off to it on Android and I’ll include it in the list below. But, other than that single app, I’m an Android fan. I know many of my colleagues in archaeology are Apple fan-folk and they often promote this IOS application or that one for iPhone and iPad, so I thought I’d go a different direction and look specifically at Android apps.

Like I said, I’ve been using both. The iPhone is my work phone and the Android is my personal phone. We get varied service on my Forest, so it’s handy to have both, but the iPhone (using Verizon) gets more consistent service than the Android (using AT&T). Though, I have to admit, where I do get service in a couple regions, the AT&T appears to be faster and more reliable. But that’s not what this quick article is about.

So, here are my Top Ten Android applications, but the order is pretty much as they came to mind rather than one greater than the other.

1. Backcountry Navigator Pro. $11.95. As Android apps go, I’ve been using this one for a while now and I have to say it’s great. And it works offline (like when you have no cell signal). As long as your phone can get a GPS signal, it’ll show you where you are on a USGS topo map as well as other navigational data. 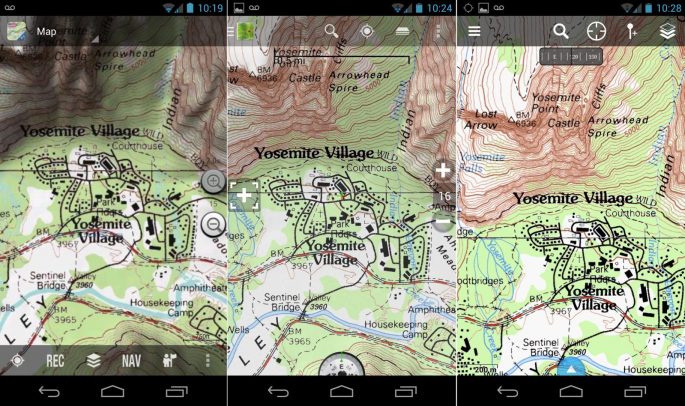 2. Old Maps. Free but could be in-app purchases. If you’re doing any historic archaeology, one of the first steps in your literature review is to look at historic maps of the region. This app gives you the ability to call up an historic map in the field, which is something cool to be sure. I’ve come across sites, made notes, gone back to the office, and pulled up GIS only to answer a question I could have in minutes standing on the location. This is no substitute for a good GIS database, but a great ad hoc tool either on the job or while traveling to other places. This is one of the newer Android apps I’ve installed, and I find it fun just to load places I’ve been and look at old maps.

3. Topography. Free. The functions on this serve me well. I can convert UTM to Geodetic (lat/long) coordinates and vice versa. I can also enter coordinates and get back an azimuth from the first to second as well as the distance. Very handy features when writing site records or quickly converting data.

4. Two Point Height. Free. A very easy to use clineometer. All you have to know is the distance to your object. I’ve used this to obtain heights for structures, hills, and trees. Again, this is good data for the historical archaeologist trying to get a hundred year old stone-constructed grain silo measured.

5. Google Office Apps (Docs, Sheets, Slides). Free. These Android apps can create and open documents, spreadsheets, and presentation files. If you’re working with a tablet and a keyboard, it’s much like having MS Office without the fluff. Save right to the Google drive or on your device. Docs allows for full-service writing of documents (copy/paste, formatting text, fonts, page layout, etc.) and Sheets is very good for creating quick charts and graphs from data. With Slides, you can create presentations that you can either edit and update later with Libre Office Present or MS Office Power Point. In a pinch, I can even think of a couple ways to present through a modern video projector.

6. NOAA Weather. Free. I think there’s a paid version, but to be honest, I like the free one. I would, however, buy it in a heartbeat if the author would write it for iOS. I’m that much of a fan. This is hands down the most accurate, easy to use weather app I’ve ever used across either Android or iOS. I can set multiple locations and it follows my current location. Radar is superimposed over Google Maps and there is a Forecast screen as well as a hour-by-hour graph of probable precipitation, wind, and temperature. Predicting weather is an imperative task for any good crew chief and this one does the best job I’ve seen. If anyone has as good a weather app that compares for iOS, i’m all ears.

7. Podcast Republic. Free. Because it’s not all about data collection when you’re in the field or traveling! Podcast republic is a fantastic podcast app and the author is very active with updating it. No kidding. I get updates like 2-3 times a week it seems. And they’re cool updates. Like adding all sorts of little features like new language translations, improved notifications, and bug fixes. There’s Chromecast support, you can sort by episodes, download order, subscription, etc. I listen to all Chris Webster and his friends at the the Archaeology Podcast Network through this app in my car and on my Amazon Echo.

8. Unit Converter. Free. Most archaeologists have to deal with several types of measurements: acres, hectares, inches/feet, centimeters/meters, etc. This conversion utility is a champ! It handles just about anything you can think of and the best part is you can save your favorite conversion types into a “Favorites” folder at the top of the list so you don’t have to scroll through looking for it all the time. It even has a tip calculator for that day when you’re treat the crew to Tex-Mex.

9. Dioptra and DiopThrace. Free. These are similar to the Theodolite app in iOS as near as I can tell, but they both leave out my favorite feature: the ability to obtain height of an object. Both will let you take photos with Geo-coordinates and angles in the photo. DiopThrace will let you do “clean” photos as well. DiopThrace will also let you determine distance from known width or height of an object. So if you use the Two-Point Height app, then stand on the perimeter of a site, you can theoretically measure distances from object to object on the same horizontal plane. Or, conversely, you can have a coworker who you know to be 5.75′ tall stand next to an object then measure distance. Here’s hoping that one or the other app author will incorporate a clineometer. function.

(edit: the link for DiopThrace went bad. I’m not so sure it’s still an app)

Dioptra (left) and DiopThrace (right)10. Artecture Draw, Sketch, Paint. Free. This is an app that supports layers, multiple pens/pencils, etc. And it has a feature I love: Trace. Just import or take a photo (from the app) and trace it. You can also import a photo, create a sketch layer, and insert text, lines, etc. Great for delineating a stratigraphic sequence, measurements, labels, etc. for a photo to go in a site recording or a report. You can save the result to .jpg, .png, or .bmp. Geometric shapes can be added and I like that there is a “pen only” mode so you don’t accidentally draw with your palm or another finger. Great on a phone, even greater on a tablet.