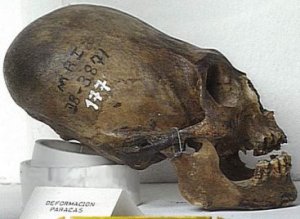 If you remember the last Indiana Jones movie, it featured some elongated skulls of ancient Peruvians and made some reference to the crystal skull allegedly found by Anna Mitchell-Hedges in the early 1920s.

Recently, a story has made its way around Facebook that the “director of the Paracas History Museum in Peru sent five samples of the Paracas skulls to undergo genetic testing,” with results that claimed the samples were “so biologically different that it would have been impossible from humans and for them to ‘interbreed.’” The Facebook post is recent and it links to online source called “The Event Chronicle” with a title of, “DNA test results: Paracas skulls are not human” ((http://www.theeventchronicle.com/metaphysics/galactic/dna-test-results-paracas-skulls-are-not-human/#)). But the story is old. The events all happened several years ago and are detailed on a webpage dated 9/4/2012 at hiddenincatours.com ((https://hiddenincatours.com/elongated-skulls-of-paracas-a-people-and-their-world/)).

The implication, of course, that something paranormal or alien is at work.

Intentional skull deformation is a practice that is found in the archaeological record of every continent on the planet with exception of Antarctica, and it can be found through time as far back as the Neanderthals. A Neanderthal skull found in Shanidar cave shows some signs of deformation -though this could be from sleeping on a hard cave floor; the famous Jericho skulls of the Neolithic, discovered by Kathleen Kenyon, show some evidence of binding; African, Melanisian, Mayan, and North American Paleo-Indians show evidence of intentional skull shaping by some form of binding. But no culture did it in such a pronounced manner as perhaps those of ancient Peru.

Several styles have been described by researchers over the years, but showing regional prevalence in Peru was a distinct fronto-occipital deformation (row 1 in the figure below) ((O’Brien, T.G., Stanley, A.M. (2013). Boards and cords: discriminating types of artificial cranial deformation in prehispanic south central Andean populations. International Journal of Osteoarchaeology 23 (4), 459-470)) and an equally distinct annular-occipital deformation (row 3). Cranial deformation that was intentional typically involved bindings to infants and toddlers since their cranial sutures haven’t fused and the skull is malleable. It’s important to note that the cranial vault itself loses or gains no additional space -the brain of a deformed skull occupies roughly the same volume as a non-deformed skull and still functions quite well, though some researchers debate effects. Still, one could reasonably assume if the effects were overly deleterious, the practice would not have continued for so long.

In the article linked to by the Facebook post, the author claims that the Paracas skulls are larger and heavier than normal, non-deformed skulls and that they have a single parietal bone rather than two. In many people, the sagittal suture separates the two parietal bones ossifies at some point in adulthood and, in some, in early childhood with a condition known as scaphocephaly -a form craniosynostosis. The first term being specifically the ossification (the fusing) of the sagittal suture between parietal bones; the second the ossification of cranial sutures in general. This fusing can cause cranial deformation itself, with scaphocephaly creating a narrow, elongated skull. Some have hypothesized that it may be an ancestor or person of significance with scaphocephaly in antiquity that was the inspiration for head-binding to create skulls that imitate or caricature this feature.

But to answer the claims of the posts author, who seems to be taking the word of the director of the Paracas History Museum, we need to put things into context. Context is always helpful in archaeology.

Not a terribly unusual thing to expect in any skull. The older a person gets, the more likely the sagittal suture is to ossify and become completely obliterated, leaving a single parietal bone instead of two. Moreover, it happens in children, causing narrow, elongated skulls (scaphocephaly). But in the photo Foerster shows on his page mentioned above, there are actually two parietal bones present. You can see the sagittal suture running between two parietal foramen, though it does appear to be nearly fused. From the image, it’s difficult to tell if the camera is capturing an anterior or posterior view. Either way, the sagittal suture is clearly visible which indicates Foerster doesn’t know what he’s looking at, which isn’t a crime. It can be confusing. But if you make extraordinary claims, you should be ready to provide extraordinary evidence. Or at least run it past someone that understands cranial anatomy.

I see no evidence that this was actually conducted or, if it was, what the actual results are. We have the director of the museum saying he sent them off for analysis but not to whom or what the specific results are. There is no representation of the alleged MtDNA results and what, specifically, was found to be so in-human.

There’s a reason why we don’t have actual results to comment on. The samples, if they were sent at all, were never sent to a “geneticist” as Foerster claims. But to the late pseudoscience proponent and self-proclaimed “paranormal researcher,” Lloyd Pye.

The added cranial size and weight

This is interesting and I genuinely want to know if there is added weight. The author of the post admits that head shaping doesn’t increase cranial vault, but he then seems to create an exception for the Paracas skulls. They are “25% larger,” he writes, and “60% heavier.” But he doesn’t state that the cranial cavity is larger. This is all possible, but unlikely. Cranial modifications lead to thinning of the cranial walls. New bone isn’t created, it’s just redistributed. It’s as if you’re a sculptor with a given amount of clay -shape it all you want, but the larger you make an object, the thinner you need to spread it. If there is added weight, that isn’t because of foreign material logged in the cranial vaults (eg. dirt), then some sort of ossification has occurred that would be interesting.

One might imagine a large, respectable, stone-facaded building, common of natural history museums the world over. But one might be wrong. The Paracas History Museum is a small, wooden building that looks more like it would be home to a quaint restaurant or tourist trap (which of course it is). The owner (and director?) is Juan Navarro Hierro, but closely associated with it is Brien Foerster a tour guide that apparently specializes in catering to the mysterious and pseudo-historic pasts of places like Peru, Bolivia, and even Egypt. For about $850 he’ll give you two nights accommodation (with breakfast!) and take you all over Paracas to see the fantastic sites. Air fare not included. In Paracas, that’s probably about $750 more than you need to spend, but you don’t get his “expert opinion” if you do it on your own.

Foerster claims that there is two types of elongated skulls. One via binding discussed above, and another via genetics. Also discussed above if you consider that craniosynostosis might have a genetic cause. Navarro allowed Foerster to “extract” samples for DNA testing that were sent to Lloyd Pye. Not an actual lab or academic institution, but to a guy who made his living as a “paranormal researcher” before his death in 2013. On his website, Foerster states Pye was a “geneticist” but his degree was a B.S. in psychology.

Someone truly interested in an explanation would have used a genuine lab that could produce genuine MtDNA results; and would welcome outside researchers’ input’ and would have made the MtDNA report available for critique. Indeed, if Foerster was truly looking for answers, he would invite outside criticism and say something like, “please find some fault with the data and results that cannot be explained.” That’s how science works.

Instead, it’s pretty clear that Foerster is out to make a buck as a mystery-monger.

Recommended Reading
In addition to the footnotes below, i recommend:

The Bioarchaeology of Artificial Cranial Modifications: New Approaches to Head Shaping and its Meanings in Pre-Columbian Mesoamerica and Beyond, by Vera Tiesler (find it in your university library or via inter-library loan)