Not long ago, while recording the remains of an historic farm in a National Forest, I came across a deep, long trench running southwest to northeast on a ridge. It was a very curious feature on an otherwise normal landscape where the forest has reclaimed what was once open farmland. I very nearly fell into it, which would have been bad since the sidewalls were steep, maybe a 25 degree slope at 12 feet deep! The brush was thick and there wasn’t a “lip” or “berm” along the edge of the trench itself, so I felt something like the intrepid adventurer cutting his way through the jungle only to encounter the sudden cliff! 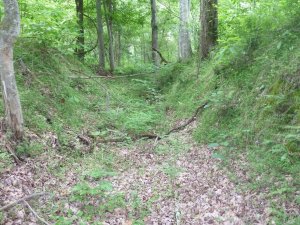 In addition to its 12 foot depth, the trench measured out to 100 feet long, and 10 feet wide. I later discovered some woven-wire fencing with a strand of barbwire along two sides that formed something of an “L” shape along the southeast and southwest sides (the corner was at the south).

Bizarre was the word that came to mind. I stood within and on the edge of this trench, and searched it for artifacts of any kind for quite some time before I left, still scratching my head. There was no pile of dirt removed from its rectangular cavity, it sloped downward somewhat to the northeast, but the slope of the ridge lay just beyond this and there was no obvious other non-natural landform I could discern.

Having other things to worry about (like finishing my recording, finding some water in the summer heat, etc.) I filed this small conundrum away for another day.

Months later, I came across a note from another archaeologist who, recording another site a few miles away, indicated a similar, albeit smaller, trench that a local informant called a “trench silo.” I already knew that grain was stored in silos and I knew what a trench was, but understanding how these words fit together to form a new term was not something I got right away. Not having an agrarian background, I had to do a bit of research to get a handle on it, and here’s what I discovered.

“Silage” was the key word I was missing. Silage is grass or fodder cut and stored green for winter feed for livestock. A trench silo, also called a silage trench, is a horizontal bin of sorts that can be used to create an airtight container. The way it’s typically done is the grass (or corn stalks, etc.) is cut and loaded on truck or tractor, brought to a trench cut in the ground, stacked up starting one end to the other. The tractor is driven back and forth on top to compress the silage, removing much of the air. It’s covered with tarps often weighted with old tires. As winter progresses, the silage is removed to feed livestock. 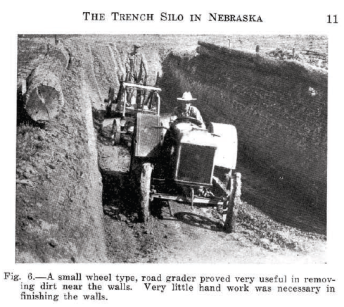 According to the Arizona bulletin, a silage trench 10 feet deep would yield 35 pounds of silage per cubic foot. The standard silage feeding program then was 35 pounds per cow per day. The remnants of the trench I found in the forest that day (which was farmland 60 years ago) was very similar to the drawing below. The strike of the slope went with the trench, the opening at the opposite end was steeper than the middle–but 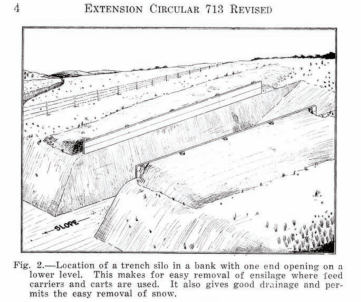 there was no berm along the sides I could see and there was fencing very close to the edge on at least one side. At another trench on another site contemporary to this one, the set up was very much the same and the fencing was obvious on three sides of the trench, leaving the down-slope side open.

Not a lot of history remains that details the lives of the people that once farmed this particular National Forest 50-100 years or more ago, so coming across and understanding features like a silage trench helps put them in new light.

The agricultural extension circulars give many suggestions and instructions that would have been available to farmers of the period, one of which is that trenches like this are only good for a couple years. There are many formulas and figures that can help calculate the amount of feed they’re capable of producing and, from this, we can extrapolate the number of head of livestock these farms had.

If we assume the silage was packed in the trench I described in the opening paragraph to a depth of 10 feet, then nearly a dozen head of cattle could have been sustained for 120 days (perhaps end of November to the end of March). If packed all the way to the 12 foot depth, then obviously add more cattle and/or days.

Trench silos aren’t artifacts the archaeologist can take back to the lab, but they’re definitely worth documenting as features within a site. Photograph them (preferably in winter months when foliage is minimal), measure them, and look for other examples in the region for comparison!