A woo-related post ended up on one of the Rock Art pages I subscribe to on FaceBook, with the author claiming a pebble exhibiting pareidolic features to be a figure carved from stone by “modern man” more than 3 million years ago. 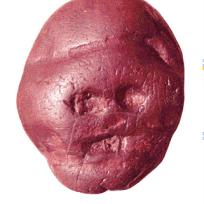 The FB post linked to this WordPress article on “TreasureBusiness.org,” the blog of a self-styled digger and treasure seeker that calls himself the “commander.” –I know right?

The author keeps repeating, interestingly enough, that it is commonly held that “modern man” is between 6000-34000 years old. He doesn’t say by whom, so I can only assume he means bible-believing Christians. Depending on how you define “modern man,” we’ve been around as a species for at least 150,000 years to upwards of 250,000 years. Lots of wiggle room there, I realize, but it isn’t as if we have the luxury of a Tardis. The blog’s “commander,” however, is sticking to a figure of 3 million years (though his article title mentions 7 Ma) and he cites the weathered and eroded pebble above as his reason.

What he doesn’t cite, however, is the evidence that indicates the pebble above is actually carved. Or how it was dated to 3 Ma. He does poison the well for those that dare nay-say him (I suppose that would be me):

The academics who support the theory that man is young state this is a natural formed pebble, naturally shaped by water.  However, those who study the pebble state the eyes are drilled and the mouth was in fact started by a drill hole and the stone was subjected to “Shaping”.  Will the experts agree?  NO, why? If it is man shaped then the short term experts are WRONG.

The passage above is a multifaceted logical fallacy. Poisoning the well, of course, but also he injects the assumption that “experts” disagree about this rock, but he cites no experts at all. The only thing he mentions about the provenience or context the rock was found in is that it is made of a material (jasperite) not common to the stratigraphic unit it was found in.

So what’s the scoop on this thing?
It turns out this is a cobble (or pebble, depending on where you arbitrarily set the size for these labels), naturally formed and weathered South Africa by a slow moving stream or flood channel where it was likely picked up by a hominid. Raymond Dart first reported this find in the 1970s as he excavated the cave where the remains of Australopithecus africanus were found and it was more recently examined by Robert Bednarik in microscopic detail. Bednarik notes that the cobble is remarkable in its “visual properties.”

The rock was probably picked up by a hominid near by or as far away as 32k from the site it was found in, but would have probably stood out because of it’s color and pareidolic features.

The key thing here isn’t that it was created by A. africanus, but that it was a manuport. It was an object that was picked up and very likely valued because of the naturally created patterns. That an australopithecine recognized the face in the cobble through pareidolia says much about the cognitive capabilities of early hominids and to see this information misrepresented for significance-junkies and mystery-mongers like the “commander” is disappointing to say the least.

Evidence of Manufacture and Dating
The “commander” doesn’t say how the cobble was dated, specifically, but the answer is that it was found in a stratigraphic unit that included dateable remains that put a date of between 2.5-3 Ma for the level. The date is correct, but the cobble was not manufactured by hominids. Bednarik’s examination (1998) showed no traces of intentional modification. With carved items, there are tiny striations visible under a microscope that show the pattern of carving. Instead, the stone was consistent with weathering in a river or fluvial transport.

I see no “experts” that regard this cobble as manufactured with intent.