On a summer evening in 1974, when I was just 7 years old, I witnessed an event that would ultimately change my life.

Not a drastic change. Nothing particularly remarkable in the grand scheme of things. In fact, the change to my life would be gradual over time. First in one direction then in another.

It was dusk. And I was headed out to feed my rabbit in its hutch at the edge of the tree line in the back yard. Walking out of the back of our house, my gaze was suddenly drawn to the sky to what I remembered then and now as a fiery but silent ball of light that passed slowly overhead from beyond the house to my back and over the trees to my front. And beyond.

I ran back in the house, scared. But not for me. I was afraid a meteor was going to burn the woods behind the house. The same woods that my rabbit’s hutch was against.

As I recounted what I observed to the adults in my life, I began to hear over and over the same thing, “oh, you saw a UFO!”

And it stuck. That was the same summer John Lennon “saw a U.F.O.” ((Walls and Bridges liner notes, “On the 23rd Aug. 1974 at 9 o’clock I saw a U.F.O.  -J.L.”)) And, as an avid comic book reader, I quickly found UFO & Flying Saucer by Gold Key Comics. And the school library got a brand new book by Charles Berlitz called, The Bermuda Triangle. Von Daniken’s Chariots of the Gods was shelved right next to it in a spot it claimed 6 years before.

As my childhood progressed into adolescence, I had the privilege to live near Wallops Island in Virginia and the NASA base it was home to. The woods that shaded my rabbit’s hutch extended across a large chain-link fence topped with barbwire that delineated NASA from the rest of the world, but I practically lived on that base. My father worked there. So did my mother on occasion. My friends and their families lived and worked there. I watched many a rocket get sent to space. Met the real Six Million Dollar Man (another story for another time!). Sat in the cockpit of a U-2 spy plane that had a ground crew member that went by the name Cool Hand (his real name was Luke).

UFOs were in popular culture and there was even a TV series in 1978 that featured two Air Force officers interviewing witnesses of UFOs for Project Blue Book. Staring Edward Winter (also Colonel Flagg of M.A.S.H.), the show generally debunked the UFO with a logical explanation, but left the viewer with an okie-doke in the form of something that defied explanation or the return of the UFO at the very end.

I was a believer in aliens and UFOs and all sorts of crap by the time I was in High School. I joined the U.S. Army a full-fledged believer.

Then, in 1986, just 12 years after my initial “UFO sighting,” I was guarding Palmerola Air Base’s flight line. I was an MP in a unit that was on duty in Honduras. It was dusk.

I walked out of our gate shack toward the flight line. My gaze was suddenly drawn to the sky to what I remembered then and now as a fiery but silent ball of light that passed slowly overhead from beyond the gate house to my back and over the flight line to my front.

As the ball of light lowered toward the ground, the silence broke. The noise and wash of a Harrier Jet’s Vertical Take Off and Landing (VTOL) engines hit me seemingly at once. The outline of this jet as it settled to the tarmac several hundred meters away was unmistakable.

Now, you’d think that this would have been an epiphany. That I might have suddenly realized that all along I was believing in nonsense based on a 7 year-old’s misunderstanding of what was the technological by-product of some really cool aviation. You’d be wrong. But I never forgot this moment. It lingered with me the way a convenience store burrito does if you heat it in a microwave dialed to “2-min”. Only longer.

Still in the Army, many more years later. In 1995. I found myself in White Sands, New Mexico. No longer a Military Policeman, I was now a Crew Chief 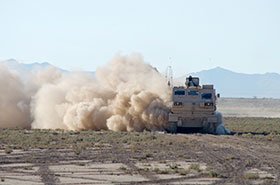 of a Multiple-Launch Rocket System (MLRS) and we were on a 30-day training deployment. White Sands has always had a place in UFO lore, previously in books and magazines, now in the newly emerging Internet of the 1990s. Sightings galore. Probably because much of the region is off-limits to civilians and, therefore, mysterious. And probably because all sorts of military aircraft, drones, missiles, rockets, balloons, etc are flown there every single day. And night. Especially at night.

One cool, calm evening my crew and I were on our way back from a reload to our next hide point. That’s the way modern artillery works: you shoot, you move, you reload, you hide somewhere new and get ready to shoot again. We were in blackout drive with very little stray light emerging from our vehicle. My driver was wearing the latest night vision goggles, but peering through the louvers of his window’s blast shield. So he had to rely heavily on me to communicate our direction and necessary speed. I was standing on my seat with my torso out of a hatch that would normally be above my head. Also with night vision goggles.

The field of vision was limited with these things, and everything was cast in a shade of green. The sky was moonless but it was also cloudless, so starlight helped illuminate the trail and surrounding desert. The stars make you look up. Anyone who wears NVGs will tell you the same thing if they think about it. You can’t help but look up at the stars on occasion. And it was one of those occasions when I saw it.

A silent, slow-moving sphere. Moving the same direction we were. Following us. Scratch that, it was passing us!

At first I thought it was one of those red, plastic spheres that are attached to power lines so that helicopters pilots can see where the lines are. I quickly realized there were no power lines around for miles. I slipped the NVGs off then back on to see if I could see it without the NVGs. I couldn’t. I also couldn’t determine the objects altitude. There was nothing to reference the object against. It was either two feet in diameter and 20 feet off the ground or 200 feet in diameter and 2,000 feet off the ground. All I knew was it made zero noise. And it was heading in the same direction we were.

My driver was scared. Not because he saw it, but because he heard me say to myself over and over, “what is that? What the fuck is that?”, through the vehicle’s intercom. He stopped. Afraid he was going to hit something. I was bewildered. Did I see a UFO? I explained to him what I saw as best I could, without suggesting space aliens or UFOs. But, recounting the story to others in my platoon later, there was no shortage of that sort of talk. And much of it was by true believers.

At this point, a kernel of skepticism was beginning to evolve within me. I recalled the Harrier in Honduras a decade before. And started to mull that over again too.

The time came for that field exercise to end. Before loading equipment on trucks and trains we had to do quite a bit of maintenance and cleaning. Visits to the local wash rack, inventories of gear, repacking, etc. While passing through the motor pool area where all the battalion’s vehicles were secured, I passed by our TAB unit. A Target Acquisition Battery’s job is, well, to acquire targets. They have radar and that sort of thing. But they also have a MET team. “MET” as in meteorological. They give us weather. A crucial thing for field artillery since air pressure and wind have profound effects on ballistic missiles. 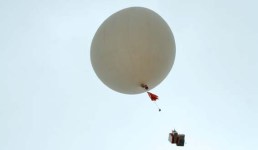 What caught my eye was the large balloon this corporal was inflating. Up it went. Tethered with a small payload and climbing. The corporal explained to me that often these balloons will burst the payload parachuting back down, but occasionally they just drift about if caught in a thermal layer until the helium molecules finally escape the walls of the balloon. Then they drift slowly back to the earth.

I mentioned what I saw just a few nights before and he laughed, but not in a mean way. There was no doubt in his mind that I saw one of his balloons, riding the warm air layer 30-50 feet above the desert, created by ground warmed by the daytime sun. At that altitude, there would probably have been some air movement even though it seemed still on the surface where I was.

Over the next few years, I slowly began to read books by Carl Sagan and Richard Feynman among others. I asked my father shortly after I left the military if there were ever any Harrier jets working out of Wallops around the time we lived there. There were.

Now I write blog articles that debunk the very things I used to believe in as a kid and young adult. As a professional archaeologist, I have an interest in dispelling fake, fantastic, or fraudulent claims about archaeological sites and history. But I also understand how easy it is to believe that something more is going on than is initially understood. Some might say my critical thinking skills emerged late, but I like to think that it was a gradual maturation that ultimately formed a solid, healthy way of seeing the world around me.

Looking for mysteries in the universe around us isn’t a bad thing. But if you’re a believer in the fantastic, be willing to ask yourself why it is you believe. And be willing to revise those beliefs through critical reasoning.

And if you’re a skeptic, try not to belittle the average believer. Coax them along if possible. Try to be understanding. I’ve long forgot that corporal’s name but not his willingness to explain what I saw without being mean.