I’m talking about the two chuckleheads that vandalized the Great Pyramid in order to promote their conspiracy theory about the pyramids being some 10,000 years older than currently believed.

Dominique Goerlitz and author Stefan Erdmann have been working on something they call “das Cheops Projekt” -a pseudoscientific project that seeks to question the origin of the Great Pyramid, specifically that Khufu (Cheops) was the pyramid’s builder and that the pyramids at Giza are significantly older than archaeology has thus far revealed.

Neither Goerlitz or Erdmann are archaeologists. The former has a PhD in plant sciences or 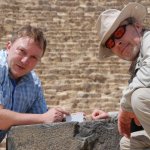 biology (my German is rusty) and the latter is a director of a nursing home. Yet this duo has made the news all over the world as “German archaeologists” who stole paint chippings from the inside of the Great Pyramid and smuggled them out of Egypt.

These chuckleheads have made archaeologists look bad in general, particularly German archaeologists. Which is a shame, because some of the best archaeology in the Near East is being done by German institutions and researchers (Klaus Schmidt at Göbekli Tepi for instance). And apparently Goerlitz maintains ties to University of Dresden, probably for credibility, which is giving this respectable institution a tarnished name.

So what was their goal?
To obtain some samples of pigment from the cartouche in the chamber above the King’s Burial Chamber in the Great Pyramid. This, they believed, could then be shown to be much younger than Khufu, thus calling into question the correlation between Khufu (which is written in the cartouche) and the pyramid itself. Leaving the possibility that the pyramid was constructed 10,000 years earlier than currently claimed.

You’re asking yourself a very basic question right now. It probably sounds something like, “huh?”

One of the reasons we know the name of the person the Great Pyramid was intended for is because of that cartouche. But that’s not all. There are other cartouches and other writings that correlate Khufu to the pyramid. But, more importantly, the pyramids at Giza are well-dated already. I honestly don’t know if anyone has tried to date the pigment of the cartouche. I doubt it. Pigment is extremely difficult to date. In fact, one doesn’t date the pigment at all. Instead, what you have to do is get enough of a sample that you can separate the pigment from the binder and emulsifier in hopes that one of these is organic. Red pigment is often iron oxide or red ochre which cannot be carbon dated. But the binder or emulsifier is often gum, egg, or glycerin (all organic binders) or animal fats. These things can be dated if an uncontaminated sample can be obtained.

But dating that cartouche doesn’t seem worth the effort given that there are so many more valuable things to date in the pyramid. Wood and mortar among the chief candidates. This has was done extensively in 1995 (and prior) by archaeologists like Wenke and the dates they arrived at put the construction at around 2690 BCE. They obtained 42 dates just for the Great Pyramid which averaged out to this figure!

So, when people ask what’s the harm in letting pyramidiots and conspiracy theorists believe what they want about things like the Giza pyramids, now you know. When they get into trouble, the media and the world think they’re real archaeologists. And we all suffer a little.