There’s a popular Facebook meme making it’s rounds –I’ve seen it at least three times now– about GMO foods and how it’s supposed to be bad for you compared with organic. The meme is a picture of two ears of corn -one is the organic and completely eaten; the other is the GMO and barely touched. The meme creator implies that squirrels can tell the difference between a GMO ear of corn and an organic ear of corn.

The meme is the image below, and it turns out there are some problems with the photo, the alleged experiment, and the assumptions. 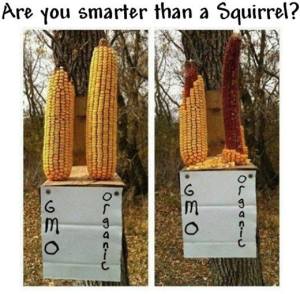 First, the photo shows two clearly different ears of corn. One is larger than the other. One is labeled “GMO” the other “organic.” But beyond that, they are quite identical. Sure, the casual observer (myself included) will see the immediate differences above, but this is just as likely to be some slight of hand as anything else. Indeed, if I had to wager, I’d bet a paycheck that these are two ears from the same crop. The kernels are roughly the same size and shape -many have an indentation on the distal end. The color values of the two ears are completely identical.

And one can imagine that the probable hoaxer favors so-called “organic” corn over the so-called GMO. And if, as I suspect, they are from the same crop, he or she picked the larger ear to represent the “organic” corn.

One last problem with the photo is the precise nature of the alleged squirrel’s bite. I’ve seen things that squirrels and other rodents eat. They aren’t quite that neat. The removal of these kernels is more consistent with bare handed shucking than rodent chewing.

Second, the alleged “experiment” is flawed to a fault. There’s no way to know which ear is GMO or organic (if we are to assume one of each is actually represented). We have no way of knowing if the squirrel (assuming one existed) chose on a random basis then stuck with the one it began with until full. We have a sample size of 1 for all variables: 1 squirrel (curiously not present); 1 GMO ear; 1 “organic” ear. The statistical significance is zero in this sort of experiment.

Third, the assumptions are that GMO are dangerous and organic somehow good for you. These assumptions might be correct, but they mostly appeal to intuitive design by the organic farming industry (it truly is an industry) and anti-GMO fear mongers.

No evidence supports that GMO crops like corn are unsafe for human or animal consumption -quite the opposite is true. Crops are genetically modified for a variety of intended outcomes such as ways to make them resistant to pests like insects or microorganisms or to improve their output in volume, nutrition, etc.

Another assumption is that rodents can discern the difference somehow between the two types of corn and that they’d care.

But the meme also assumes that a rodent resistant grain would be a bad thing! If a genetic modification could make rats lose their taste for corn (squirrels are very much related to rats), then this would be a good thing. Alas, if rats were that discriminating, they probably wouldn’t eat rat poison. Interesting how they can’t tell the difference between arsenic and food.

Don’t get me wrong, I have some problems with GMO foods but so far none of them are about “safeness” or their potential to be unhealthy. I’m concerned with the very nature of GMO being controlled by intellectual property rights and look forward to the day that the Open Source movement emerges within GMO.

Perhaps I’ll post more on GMO in the future, but I couldn’t let this meme escape a third time without destroying it.

Still, it’s a good example of how people are easily duped by fear-mongering and pseudoscience.