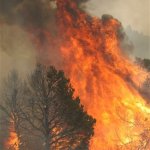 Using a $1.5 million NSF grant, a team led by the University of Arizona plans to study the how humans in the American Southwest responded and reacted to forest changes due to wildfire and climate.

Living in a drought stricken region of the U.S. myself, and having witnessed the devastating effects of wildfires first hand, I fully agree with Swetnam when points out that “drought and dry conditions are going to keep going on, so there’s an urgency in understanding what’s happening.” What his research team seeks to discover is what ways might we be overlooking as we try to coexist with forests as climate changes occur.

They’ll study “how people and climate and fires have interacted in one place over long time scales” and hope to “learn something fundamental about how the people-fire-climate system works.”

“What amount of change with regard to fuel, forest densities, how often you burn it or don’t burn it, leads to forests that are sustained through time?”

Ethno-archaeological methods will likely be used in working with existing tribes in New Mexico’s Jemez Mountains region (tribes of the Jemez, Zuni, Hopi, and Apache peoples). They’ll also gather substantial amounts of tree-ring data from the region along with other archaeological methods that will allow the team to detect the fire history of the forest through time. Data gathered by the team will end up in a database which can be used to create dynamic computer models.

More information can be found at:

Quotes above and the full story can be found at http://uanews.org/node/42041