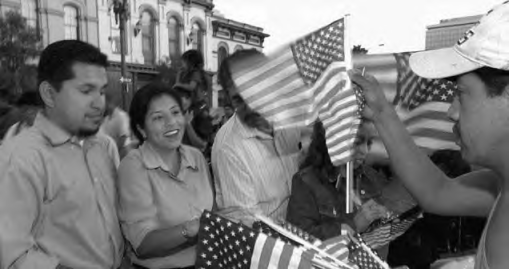 In a nation so divided, we often forget where true freedom comes from: the human spirit and the hearts and minds of men and women who wanted more for themselves and their families. As we celebrate our nationsÂ IndependenceÂ on the Fourth of July, we should put aside the xenophobia and bigotry that so often accompanies the rhetoric of those who claim to be patriots. Our nation is essentially the product of invasion and bigotry combined with a desire to create a better, more democratic nation, free of the tyranny of kings and theocracy. We displaced the rightful residents, nearly 500 nations of natives, and forged a new, united and democratic one in their place.

Right or wrong, we now stand as potentially the greatest nation on the planet. But we’re fast losing to nations who are learning from our mistakes. If we want to redeem our transgressions and make the sacrifices of our ancestors (which includes Native Americans, Mexicans, and early immigrants from Europe) count for something, we’ll need to find common ground. We’ll need to find ways of solving problems of illegal immigration in ways that exclude bigotry andÂ prejudice.

Today’s post is by a guest blogger. My lovely and talented spouse received one of those chain-emails circulated by the tea-bagger crowd which depicted several photos of brown-skinned people making rude gestures and displaying the U.S. flag upside down. Doubtless, these were photographs without original context and intended to sow seeds of hatred and animosity towards those of “brown skin” from otherwise well-meaning U.S. citizens who perhaps are only getting one perspective.

My wife’s words in response:

Do any of you actually know anyone personally who is trying to immigrate to this country (legally or illegally)?

Can anyone who has received this email tell me who is in the pictures?

Can anyone tell me where the pictures were taken?

How do you know that people depicted in the pictures aren’t legal Citizens (their skin color perhaps – isn’t that prejudice in it’s finest)?

Can anyone also prove to me that the actions depicted by the men in the pictures were unprovoked by the person who was taking them. I sincerely doubt they were (as they are directed directly at the picture taker). This also tells me that someone who claims to be a respectful American likely went out and insulted folks they did not know – this happens every day by Americans who were born here.

The Mexicans I know work their butts off for very little money and live in conditions that an American teenager would NEVER CONSIDER, all to make a life that is better for their families. The Mexicans I know are friendly and glad to be here and are doing their best to make ends meet. They shop at Garage Sales for all their clothes, They dress up every Sunday for church, They live as communities who care for and look out for one another and invite their neighbors to join them.

How many of you reading this email can can name every person who lives in at least a three house radius of yours? Mine can, and they are Mexican.

Our prison systems are filled to capacity with AMERICANS. We don’t have enough space for our native born criminals. We should look at ourselves before we judge others!

I can honestly say that my neighborhood is 90% Mexican. And it’s one of the safest places I’ve ever lived. Not only is crime in my neighborhood non-existent, but the fellowship and kindness is unparalleled. My neighbors are mostly native-born American citizens. Some are first and second generation immigrants. A few are here illegally. I love them all. Every one. And I trust them every single day with my life, my property, and the safety of my daughter who plays with their kids on the same streets as they. They work hard, they pay taxes, and they give back to the community and the state. They shop in local stores, restaurants, and spend money in our local economy. They have my admiration and respect.

And I have varied degrees of pity and embarrassment for sheltered, privileged white Americans who think themselves somehow their betters.

On a day where Freedom should Ring, I’m proud to say I’m not a slave to the bigotry and hatred that dominates the lives of so many people.