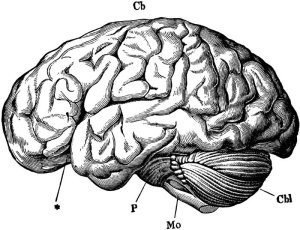 Patterns of thought can be effectively inferred from the material remains of the past. Nicholas Toth ((Toth, Nicholas (1985). Archaeological Evidence for Preferential Right-Handedness in the Lower and Middle Pleistocene and Its Possible Implications. Journal of Human Evolution 14:607-614)) conducted experiments in flintknapping in which he discovered patterns he proposed as evidence of right-handedness in hominids reaching into the archaeological record as far back as 1.9 Ma. The study isn’t without its critics ((Patterson, L.W. and J.B. Sollberger (1986). Comments on Toth’s Right-Handedness Study. Lithic Technology 15:109-111)), but the idea that archaeologists can apply method and theory to the material record which can provide inferences about handedness is important since this would also imply a point at which lateralization of the human brain is occurring as well. Laterality would indicate physical changes in the Homo brain that might allow for language capability, improved motor control, and other specialized adaptations and higher brain functions ((Donald, Merlin (1998). Hominid Enculturation and Cognitive Evolution. In Mind and Matter: Cognition and Material Culture.Â C. Renfrew and C. Scarre, ed. Pp. 7-17. Oxford: Oxbow Books)).

Wynn and Coolidge ((Wynn, Thomas, and Frederick L. Coolidge (2008). Stone-Age Meeting of Minds. American Scientist 96:44-51)) apply the theory of cognitive archaeology to their hypothesis that it was a marked change in human cognitive ability that made it possible for Homo sapiens to displace H. neanderhalensis, which successfully occupied Europe for more than 200,000 years. They note that humans and Neandertals met at least twice in prehistory, once at around 80,000 years ago and again at around 40,000 years ago. The first meeting was one in which the Neandertals migrated into the Near East at the beginning of the last ice age, out-competing their human cousins who appear to have migrated back into Africa. The second encounter, which happened 40,000 years later had a very different outcome. Within just 10,000 years, the Neandertals went extinct after anatomically modern H. sapiens migrated into central Europe. Anatomically, these humans and their Near Eastern predecessors just 40,000 years prior were indistinguishable. Yet there must have been some marked advantage, according to Wynn and Coolidge, which allowed this new turn of events. For the Neandertals, their status quo served them well. No significant innovation appears evident in the archaeological record for 200,000 years until the arrival of H. sapiens. Their hearths were simple and ad hoc, (p.45), they made no apparent use of art or depictions, jewelry or other personal adornments that survived in the archaeological record, until perhaps their encounters with H. sapiens.

In searching for what changes might have occurred to H. sapiens at around 40,000 years ago, Wynn and Coolidge describe recent research in genetics, including that of the FOXP2 gene which was found to be closely associated with language articulation and comprehension and, perhaps, responsible for the abilities of speech and language in humans. While this gene is present in many mammalian species, the version in humans â€œunderwent some unique changes during recent evolution (p. 48).â€ Additional research, however, has shown this gene to be shared with Neandertals in its human form, implying that the changes occurred prior to the last common ancestor to H. sapiens and Neandertals, eliminating it from list of suspects responsible for the new cognitive advances that gave H. sapiens the advantage over their Neandertal cousins 40,000 years ago.

However, another genetic change these authors explore is the MCPH1 gene, expressed in the fetal brain and perhaps responsible for increased brain size and capability and estimated to have first appeared at around 37,000 years ago where -consistent with the period in which H. sapiens began to dominate the Neandertals. Still, Wynn and Coolidge argue that there must be more than a single genetic change to account for the disparity that is assumed to have existed between the mental capabilities of H. sapiens and Neandertals at their second encounter. They do, in later work, explore the role of the human parietal cortex ((Wynn, Thomas, Frederick Coolidge, and Martha Bright (2009). Hohlenstein-Stadel and the Evolution of Human Conceptual Thought. Cambridge Archaeological Journal 19(1):73-83)) as a means of increased ability to form concepts such as ontological categories and the results of combinations of these categorical concepts into new, completely abstract concepts and ideas that exist only in the human mind. A non-allometric expansion of the parietal cortex, they propose, would account for the sudden appearance of abstract thought in the material record at around 32,000 years ago as well as the ability to plan and strategize, and thus out-compete the Neandertals. But they admit support for this hypothesis is “paradoxically thin” (p. 78) due to the non-allometric aspect -leaving no outward change in human cranial remains to be discovered and the limitations of artifacts that can survive as examples of technology and subsistence in the material record. It’s important to find artefacts like this that help us understand. Our knowledge of the brain expands as our medical reach does.

One artifact that Wynn and Coolidge do focus on is the Hohlenstein-Stadel figurine (fig. 1), which represents a half-man, half-lion and dates to human culture in Southwestern Germany at about 32,000 years ago, approximately 8,000 years after the expansion of H. sapiens into Neandertal territory. The artifact itself might not mark the actual beginning of abstract thought and planning, the cognitive change that might have made it possible for H. sapiens to dominate and out-compete the Neandertals, since it may very well be that it took a very long time for significant differences in technology, subsistence practices and social interactions to develop (Wynn and Coolidge 2008:51). It may also be that there are other, older artifacts waiting for discovery which are more consistent with the 40,000 year old migration of H. sapiens into Europe.

The Hohlenstein-Stadel figurine itself is a good representation of abstract thinking and executive function because of its subject: a Löwenmensch, or “lion-man.” In order for the individual who carved this 28 cm tall figurine to do so, he would have had to hold in his mind two ontological categories: one of a man and one of a lion, with all the characteristics and features of these two categories understood by the individual. In addition, this individual would have necessarily had to be able to conceive of and execute in figurine form, an abstract combination of these two categories. As Wynn and Coolidge point out, “Löwenmensch,or lion-man, is not of this earth. It melds the cognitively distinct categories of lion and person into a single, abstract entity, endowed no doubt with many features we cannot see.”

Certainly cognitive archaeology can be applied to many other questions of human activity and to the material records of all periods of human history and prehistory. Other applications can easily involve weights and measurements, inferring what standards earlier cultures used in architecture or trade (Renfrew 2009; Renfrew and Bahn 1996). Questions of not only how were weights used by a culture might be explored, but also how did a culture arrive at using a particular weight as a standard to begin with, such as with the stone cubes used as weights in the Indus Valley (3300-1300 BCE). Archaeologists can also use methods and theory of cognitive archaeology to explore the ritual and religious aspects of society and how symbols are used to define their beliefs, or to infer the nature of elite status and the effects elite power on populations subjugated by them. Another example were cognitive archaeological theory can be applied is in exploring the nature of architectural planning as a cognitively held concept such as with the regularity found in the ruins of Mohenjodaro, a city of the Indus Valley civilization, which indicates intention of design. These and many others are examples of how the archaeological record can be used by theory and methods associated with cognitive archaeology to obtain useful insight and information that can both help answer and provide research questions on how past cultures thought and how their thoughts affected the world around them -perhaps even how the world around them affected their thoughts.