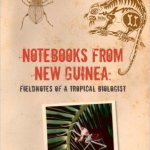 He’s a biologist, but from the posts I linked to below, Vojtech Novotny reads like an ethnographer. It just goes to show you, when it comes to doing science in the world -out of the laboratory, you’re going to have to deal with culture and people.
Biologist Vojtech Novotny describes his experiences as a bystander in the jungle of New Guinea during a medical emergency, specifically, the difficulties encountered when trying to get someone to an adequate medical facility.

Read about the taboos and customs he encountered in the village where his research takes place and get a sense of the content of his book, Notebooks from New Guinea. In this post, Novotny participated in a Q&A about what it was like to be a Czech scientist living in New Guinea and interacting with the indigenous people there, as well as his writing process. Novotny also describes his research a bit and his inclusion of indigenous research technicians. Novotny may be a biologist, but his posts read like ethnography. I’m betting you’ll enjoy them.