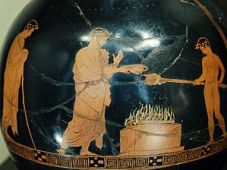 I don’t often post on religious topics on this blog. At least not topics related to modern religion like Christianity. I’m more interested in ancient religion and expression of religion and belief in the material record of antiquity than modern squabbles about “belief in God,” etc.

But I took the time to listen to a podcast titled, “anthropology of religion” hosted by the Minnesota Atheists. It was an audio version of their public access television show I believe. Featured were two theologians discussing the anthropology of religion. Or so they thought. I actually took the time to leave a post on the podcast episode’s blog and I thought I’d share it here:

I listened with some fascination and a bit of dismay to the podcast interviewing Chester O’Gorman and Grant Steves. I was particularly shocked at the limited point of view O’Gorman applied to the subject of the anthropology of religion. Clearly his is a position of â€œtheologyâ€ and not of science, so I kept telling myself to be patient and forgiving. But I’d still like to post a comment regarding some of his statements.

O’Gorman seems fixated with â€œvictimizationâ€ and â€œscapegoatingâ€ in ritual and religious expression. While I’m familiar with the works of RenÃ© Girard, I’m definitely not an expert. And, while I recognize that O’Gorman is channeling Girard, nearly verbatim in certain instances, I’ll confine my criticism to O’Gorman and not Girard.

O’Gorman’s admittance that his definitions of ritual and myth are â€œnarrowâ€ are one of the few statements I found agreeable. He says that ritual is the means of reenacting the process of victimization and that sacrifice must include a victim. Indeed, his exact words are, â€œthere has always been a sacrifice at the center of ritual.â€ This is, of course, an absurd statement. There are many rituals that do not include sacrifices: marriage, baptism, the sweat lodge, the visionquest, pipe ceremonies, funerals, feasts, potlach, etc. In some of these, one can make some very abstract connections to sacrifices, but these are hardly the types of sacrifices that O’Gorman is referring to. And each of these rituals existed either long before or in complete ignorance of Christianity, so his remark that â€œwe have them nowâ€ (rituals without sacrifice), doesn’t follow.

Sacrifice *can* be seen as including a victim, but it’s more accurately described as showing a degree of piety or dedication by offering personal wealth or otherwise valuable possessions for divine consumption. Wealthy Greeks sacrificed oxen in the Bronze Age by bringing their best stock to the temple and delivering to the priests within the tenemos of the temple where it was butchered and fed to the populace. In this manner, wealth was redistributed (with the priestly class getting the best cuts). This ensured the society as a whole benefited. The remaining bits of meat and skin were burnt on an altar, the gods getting their share via the smoke.

This is quite different from the type of sacrifice O’Gorman was alluding to when he states â€œthings have evolved away from human sacrifice.â€ Here he seems to be implying that Christian religious doctrines have done away with the violence associated with sacrifice, leaving only the sometimes graphic and violent reenactments of an alleged messiah being sacrificed on a wooden cross. Christians the world over keep such iconography close to them in the form of little crosses on chains, which they periodically raise to kiss, or by mimicking a cross with a hand gesture.

Human sacrifice is actually very rare in the archaeological record and never more prevalent than within the histories of Christianity. O’Gorman says, â€œit’s only through Christian influence that ritual takes on a new connotation where sacrifice no longer happens.â€ O’Gorman should either give back his degree or demand a refund of his tuition! While Precolumbian Mesoamericans practiced human sacrifice, we cannot overlook the fact that this practice was halted primarily by Christian invaders who slaughtered these â€œsavages.â€ While Maya, Incan, Aztec and a few other cultures stand out as including various human and animal sacrifices, their actions pale when compared to early and even modern Christians who burned heretics and witches during the inquisition, poured Kool-Aid for parishioners at Jonestown, ignited themselves at Waco, and took their shoes off for a never ending nap at Heaven’s Gate.

Most other religions, both extant and extinct, show evidence of many, many rituals that exist without any sort of sacrifice except, perhaps, that of time and effort. One of the most significant ritual exercises present in religions the world over is ritual prayer and incantation. While there are sacrifices associated with some (offerings of food, wine, anointments of oil, etc.), the vast majority show no evidence of sacrifice. And to suggest that the symbolism of sacrifice found in the myth of Jesus isn’t technically a sacrifice because a victim isn’t being exploited begs the question since it assumes that the mythos presented in the gospels are both accurate testaments as well as representations of actual events, all regardless of whether Jesus actually existed.

As a graduate student of anthropology whose focus is on the archaeological remains of cult and religious belief in antiquity, I’d have to say I disagree with O’Gorman at nearly every turn of his conversation. Clearly his main focus is â€œtheology.â€ I suspect he’s genuine in his desire to align his studies with an anthropological perspective, but I also suspect this is tainted by the conclusions one must necessarily begin with when taking on the title â€œtheologian.â€ Anthropologists are scientists. Scientists do not begin with conclusions to which they seek only data which fit, rather they observe data and arrive at conclusions.

O’Gorman is no anthropologist.