Museums and private collectors are the motivations behind thieves that loot archaeological sites around the world, some of them never even known by archaeologists much less studied. Sites the world over are suffering major damage and destruction at the hands of a few that engage in illicit excavations to provide antiquities to the free market that isn’t exclusive to just private collectors but also includes major museums.

Sites in Peru, Iraq, South East Asia, and even South West United States have been plundered to the point that they look like the cratered surface of the moon. 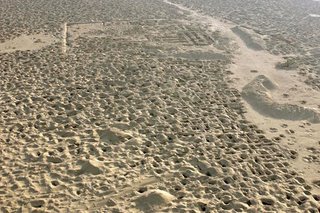 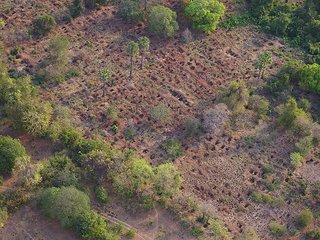 The first of these two photos is a site in Iraq (courtesy of World Monuments Fund), the second is of a site in Cambodia (courtesy of Heritage Watch). They’re half a world apart but strikingly similar in the destruction wrought by looters bent on removing grave goods for sale on the black market.

In a recent article of the New York Sun, titled Collecting vs. Cultural Heritage, two perspectives were presented in the debate over antiquities trade and acquisition by museums. The article’s author reported on the talk given to the Chelsea Art Museum by Peter Watson, the author of The Medici Conspiracy: the Illicit Journey of Looted Antiquities. Watson’s presentation was mostly regarding his book, an account of the investigation and subsequent arrest and prosecution by Italian authorities of antiquities “dealer” Giacomo Medici, Robert Hecht and Marion True (the former curator of the J. Paul Getty Museum). Watson’s implications were that museums were still culpable when it comes to illicit antiquities trade, and accused them of “dragging their feet” on the issue.

Museums like the Met, the Getty, and Boston’s MFA still have vast stores of unprovenanced antiquities – artifacts that have no documentation that places them in a private collection prior to 1970, when UNESCO established its convention prohibiting and preventing the trade of illicit antiquities.

The Sun’s author also reported on a presentation given by the Met’s director, Philippe de Montebello, who defended the collecting of antiquities by museums. His argument was that museums such as the Met, the Louvre, and the British Museum wouldn’t exist were it not for antiquities trade and acquisition. His statement was true enough, but one that may be irresponsible in today’s age. Colin Renfrew commented in Loot, Legitimacy and Ownership: The Ethical Crisis in Archaeology that should museums and collectors continue to collect unprovenanced antiquities, the looters and thieves will continue to have a market to sell them to. Their tactics are such that the artifacts are removed from their contexts without scientific discovery or documentation and, thus, anything that can be said about the culture being robbed is forever lost.

While de Montebello isn’t defending the illicit trade of antiquities directly, and he justifies his position by claiming that the acquisition of pieces by museums is such that it barely influences the illegal looting of sites (I suspect Renfrew would disagree), there are those that do defend looting as a legitimate pastime and occupation.

The Arizona Republic ran a series of articles by Dennis Wagner last week that discussed the looting and plundering of cultural sites in America’s Southwest and, in one, Wagner interviewed Rodney Tidwell who says, “[t]he word is not looting, it’s digging. We excavate.” Tidwell was convicted on 20 felony counts of stealing and selling Native American cultural goods and went to jail for 33 months for his “digging.”

In the dead of night, looters are destroying the history of America, desecrating sacred Indian ruins. An estimated 80 percent of the nation’s ancient archaeological sites have been plundered or robbed by shovel-toting looters. Though some of the pillaging is done by amateurs who don’t know any better, more serious damage is wrought by professionals who dig deep, sometimes even using backhoes. The motive is money.

Wagner goes on to point out the plight of authorities to deal with looters bent on stealing and destroying cultural heritage in their greed to make a buck. The Bureau of Land Management has 261 million acres of responsibility and much of the land is not yet surveyed. Wagner writes that a federal report from 2002 estimates 32 percent of the Four Corners region of Colorado, Utah, New Mexico and Arizona has been looted but archaeologists will generally lean towards 8 of every 10 sites have been looted.

Land management and lack of manpower isn’t the only problem authorities face, however. If a looter is caught, it must be demonstrated that the artifacts originated from public lands. Short of catching them in the act, this becomes a near impossibility and it is completely legal for looters to plunder, desecrate and destroy sites on private land in the United States. Indeed, many land owners lease their land for ‘digs’ and some looters have been known to buy land, plunder the artifacts (ignoring the scientific processes for recording and understanding context), then resell the land.

And with buyers, the problem is even more difficult since authorities must prove that the buyer knew the artifacts to be looted.

So what can you do?