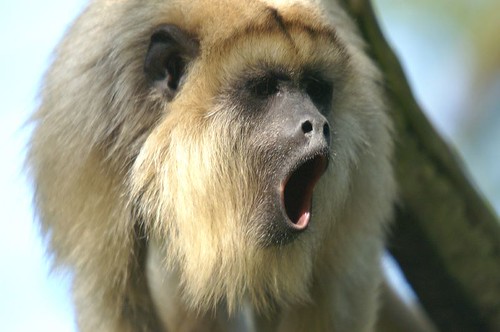 Perhaps the most familiar characteristic of the howler monkey are their vocalizations for which they are named. Howlers, both male and female, use their loud, lion-like roars (Fleagle 1999 p150) to advertise their presence and to warn or intimidate intruders (Kitchen 2004). Vocalizations may also provide auditory cues that reveal fighting ability of a group or an individual (Kitchen 2004). Vocal battles may culminate or result in actual physical combat in which an intruder makes an effort to usurp the group’s alpha male. Most howler troops consist of several adult males, but have a single alpha male that mates with the troop’s females, putting any dependent offspring in the alpha’s lineage. The immigrant male that forcibly replaces the group’s alpha can kill the dependent infants of the ousted alpha male (Fleagle 1999, p152; Kitchen 2004, p126). Infanticide of offspring under 9 months old hastens the female’s return to estrus, allowing the immigrant alpha male the opportunity to establish his own lineage according to data that is both circumstantial and observational (Kitchen 2004).

The Influence of Offspring

Kitchen discovered that the presence of small offspring had an influence on the alpha male’s vocal responses in that the alpha was quicker to begin howling, howled more often, and for longer periods when small offspring were present in the group. If the odds were against the alpha, howling was done only when small offspring were present, suggesting that an assessment was made by the monkey regarding the value of winning before escalating the conflict. Kitchen concluded that howling displays are costly with regard to energy, but the benefits outweigh the costs if intruders can be impeded. She also noted that males of small offspring stood their ground and, while did not advance upon aggressors, did not flee, indicating that stationary displays might be a compromise between fight and flight.

Keepin’ it on the ‘Down Low’

Kitchen also observed that howlers didn’t always respond to howling neighbors during natural encounters. This, she reasoned, could be due simply to conservation of energy since the howler’s diet limits activity. In general, howlers spend more than 60% of their day resting (Milton 1980; Kitchen 2004). Kitchen also suggested that the lack of vocal response could be a part of a strategy to remain hidden and quiet not only to conserve energy but to avoid facing superior opponents, which could, in turn, suggest that acoustic characteristics might be present in vocalizations which reveal fighting ability.

Loud calls occur most frequently at dawn and may serve the purpose of announcing a group’s location, establishing territory and distance between groups, and revealing a group’s actual composition. They can also serve the purpose of strengthening pair bonds between mates through “duets.” Vocalizations at night, however, occur at a higher rate than the day and calls have been measured to be as high as 90 dB and below 1 kHz (Kinzey 1997).

Conservation and Protection for the Howler

Howlers are reported to have been preyed on by both the harpy eagle and the jaguar (Kinzey 1997), but their most serious threat is, perhaps, habitat loss due to human activity. The construction of the Petit Saut hydroelectric dam in French Guiana flooded over 365 square kilometers of forest by 1995 destroying the natural habitats of many species, including that of the red howler (Richard-Hansen, Vié, and de Thoisy 2000). The red howlers in the inundated habitat were previously hunted to the point of serious reduction of population and the decision was made to translocate the remaining groups in the region to a new habitat. Though all but one of the translocated groups split up after being released in a new home range, the overall operation was considered a success since many of the distinctive behaviors of individuals within the groups were re-observed following the translocation. Richard-Hansen, Vié and de Thoisy (2000) demonstrated that such translocations were viable in situations of habitat destruction or other conservation needs exist.