Afarensis has been doing his weekly “Know Your Primate” series, so I hope he won’t mind if I toss in my bit on the howler monkey. It was his series that inspired me and reminded me that I had this from a paper I wrote a while back. I’ll post this in two, maybe three, parts with references and I hope the information will be of value to students writing high school and college papers or for those who are simply fascinated by primates or howlers in particular. Please also feel free to comment on these posts as well! 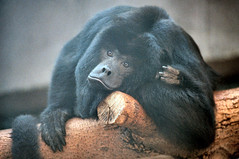 The Ateline genera also include woolly monkeys, spider monkeys, and the woolly spider monkey along with the howler. Atelines are the largest of the Platyrrhines and the largest average 10 kg. All Atelines have long, prehensile tails with friction ridges used in gripping tree branches during climbing and suspension. According to Fleagle (1999, p 150), Atelines exhibit similarities to extant apes with regard to many characteristics of their limb and trunk anatomy and suspensory behavior.

Of the Atelines, the howling monkeys (Alouatta) are the most distinct genus (Fleagle 1999 p150) and are often placed in a separate subfamily. Their distribution is wide-ranging from southern Mexico to northern Argentina. Their biomass ranges from 6 to 10 kg and color differences can be distinctive between and even within species. Fleagle notes that the colors range from red to brown and from black to blond (p150). Howler dentition includes small incisors and large, sexually dimorphic canines. The lower molars consist of a narrow tigonid section and a large talonid while the upper molars have four cusps with prominent shearing crests consistent with a foliverous diet.

The howler skull consists of a relatively small cranial capacity and a lack of cranial flexion. The mandible is large and deep and an enlarged hyoid bone creates a hollow resonating chamber where the howler’s characteristic vocalizations are produced. Post cranial characteristics include forelimbs and hind limbs that are similar in length, a long, prehensile tail, and schizodactyly caused by a poorly differentiated thumb, which facilitates grasping branches between the second and third digits, but precludes fine manipulation of objects (Fleagle 1999; Milton 1980; Kinzey 1997). The howler prehensile tail reduces the need for leaping or jumping, which have higher energy costs and provides the monkey with an additional appendage in distributing its weight during arboreal activity. The howler can also use the tail to suspend itself from branches to obtain otherwise inaccessible foods (Milton 1980).

Howler habitat is varied because of the wide distribution of the six allopatric species and includes primary rain forests, montane forests, deciduous forests, secondary forests and llanos. They live at altitudes that range from sea level to 3200 meters and prefer the canopy levels of forests, though species in the dryer habitats regularly come to ground and cross open areas as they travel between patches of forest. Locomotion with howlers is generally slow and quadrapedal and they rarely leap. Howlers use suspensory locomotion, mostly climbing, during feeding and occasionally during travel (Fleagle 1999).

Socially, howlers live mostly in groups of several adults of both males and females with dependent offspring. The size of the group varies dependent upon the productive value of the environment as well as the age of the group, and can range from 12 to 30 individuals as with A. palliata and smaller troops as with A. seniculus and A. caraya. Depending upon the group’s size, the howler home range can be between 10-50 acres and their day ranges are small at less than 100 meters. The home range is considered to be small for their biomass (Fleagle 1999, p. 150) and some can be as little as 3 to 15 acres depending upon species and habitat with up to 60% overlap between one or more groups (Kitchen 2004). Range needs are met more easily because of their ability to subsist on diversified food items which are very common such as leaves. Because of their small ranges, howlers travel little but spend long periods resting and digesting (Fleagle 1999; Milton 1980; Kinzey 1997).