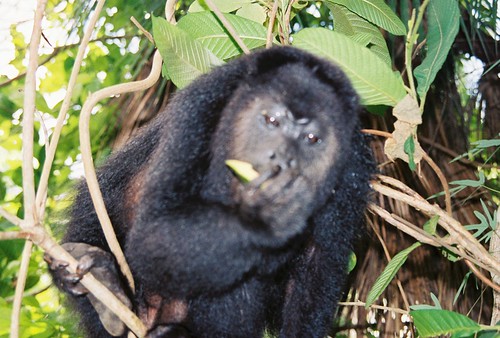 Milton’s Study on and Island in the Panama Canal

Milton studied two groups of mantled howlers on Barro Colorado Island in the Panama Canal (1980) and discovered that while howlers don’t have to pursue their foods, neither can they use a “sit and wait” strategy. Their preference for seasonal foods presents them with a continual problem of locating foods they like. Food location and monitoring was their main reason for travel and the alpha male in her study groups would initiate travel with a “low, almost inaudible, cough (p. 102).” The members of the troop would gather in one area of a tree and move out, single file, in a direction indicated by the alpha male. The troop’s travel through trees was in single file, which suggested to Milton a “goal-oriented” endeavor rather than a phalanx formation as with other primate species that would want to cover as much area as possible in their search for food. She also notes, however, that the single file is less risky because the relatively massive howler monkey is in danger of falling should it grab a branch that is brittle or dead, which breaks. The single file formation could be a method of providing a safe, proven route for the troop and the troop often used the same routes for other travel events, reinforcing this hypothesis.

In Milton’s study (1980), 90% of all travel events were followed by feeding events. She found that her observed groups traveled 1.23 mean hours per day at a mean distance of 443 meters at a mean rate of 360 meters per hour and she referred to howlers as “travel minimizers.” The howlers slept wherever they happened to find suitable spots at nightfall and at their last feeding location. While feeding, howlers generally orient themselves around 1 or 2 “pivotal” trees, moving to different pivotal trees once depleted.

Milton (1980) reported that, of the Howlers she observed during her Barro Colorado Island study, 91.4% of their feeding time was spent on seasonal foods: young leaves, fruits and flowers. They spent 1.6% of their feeding time on perennial foods or foliage that could be considered mature even though perennial foods were more abundant than seasonal and always available, showing a clear preference for specific foods. In a study along the Teles Pires River in Brazil (Pinto and Setz 2004), red-handed howlers (Alouatta belzebul discolor) were similarly observed to prefer seasonal fruits, leaves and flowers over perennial in which the howlers of the study spent 72-92% of their feeding time on the seasonal foods even though perennial were always available. Kinzey (1997) noted that howlers “are either folivore-frugivores or frugivore-folivores, depending on the population and season (p. 179).” He also indicated, as Milton did, that there are food preferences that influence the decisions of howler foraging strategies and that young leaves are preferred over mature but that there is clear exclusivity correlated to seasons, habitat, species and populations within species. At times, howlers prefer fruits or flowers over leaves, while during the same season but in different habitats, the same species might prefer leaves over fruit. Kinzey cites an unpublished dissertation that revealed the howlers of the study required 15.6% of their diet to consist of protein and that this is a driving force in their food choices.

The howler diet limits their activity and, indeed, dominates it. On average, howlers spend over 60% of their day resting and traveled mainly to locate or monitor food sources (Milton 1980). Howlers of the Barro Colorado (Milton 1980) and the Teles Pires (Pinto and Setz 2004) both preferred products of species of Ficus: leaves, fruits and flowers. However, they were also noted to feed on other species as well. Milton documented 87 leaf sources, 36 fruit sources, and 25 flower sources in her study of the mantled howler while the red-handed howlers in the Pinto and Setz study consumed leaves from 27 sources, fruits from 35 sources, and flowers from 8 sources. Milton observed to eat some leaf species only once, however, and hypothesized that the monkeys could have been sampling other leaf sources within their habitat and, perhaps, gauging them for palatability and nutritional value. She cited the specialized receptors in rats that can recognize potential nutrient-rich foods, sending information to the central nervous system and suggested that Alouatta may have a similar adaptive function. Howlers also appear able to detoxify secondary compounds in food sources, such as terpene, an unsaturated hydrocarbon found in plants. Other New World primates haven’t developed this function (Milton 1980).

Trichromatic primates, which include humans as well as Alouatta, have three specialized cones for color vision (Fleagle 1999, pp. 25-26). In a study of the red howler, in the rainforest of French Guiana, (Regan et al 1998), it was concluded that trichromacy in Alouatta allows howlers to locate and identify fruits among foliage from long distances. Regan et al admitted that, while their results were conclusive with regard to the ability of red howlers to consistently identify specific fruits and that specific fruits were optimally colored, they could not demonstrate whether trichromacy was an evolutionary adaptation to the fruit or whether the fruit colors were adapted to the trichromacy. The did, however, underscore the unknown cause of dichromacy among other Platyrrhines, where there are only two color cones rather than three, thus limiting the ability of dichromats to see certain colors effectively.

Washing it all down? Not for the Howler.

Howlers generally obtain water from their food (Carpenter 1934; Milton 1980; Kinzey 1997; Gilbert and Stouffer 1989), leaves and fruit can contain up to 95% water by weight or from arboreal sources following a rain where the monkeys lick their fingers after wetting them in the runoff (Carpenter 1934). Rarely, howlers have been observed coming to drink at standing ground water sources (Gilbert and Stouffer 1989; Carpenter 1934), but in a very cautious manner. The observation by Gilbert and Stouffer was that the monkeys left the trees one at a time to drink with a male, probably the alpha, standing watch. They hypothesized that the dry conditions of that year imposed a water stress that inhibited growth of new leaves, forcing the howlers to obtain water from other sources.