LIDAR (light detection and ranging) is a technology that’s gained lot of traction in archaeology over the last decade, though it’s been one of the more costly tools in the kit for archaeologists lucky enough to use it. Because of this, most archaeologists tend to look for LIDAR data from large scale mapping projects funded by state and federal budgets. In these types of projects, the LIDAR sensor is flown in a grid pattern by an aircraft over large regions. And the results are resolutions of around 1-5 meters, though some there are better resolutions in some projects.

the LIDAR sensor payload with a GPS and data collector, but this has been a pricey solution. The LIDAR sensor, until recently, weighs a couple pounds and requires a large, cumbersome UAV to do the job. And the sensor is expensive. At $80,000 for just the sensor, and another $1,000 + for the UAV (not including software, GPS, data collector, etc.), this is far beyond the typical budget for the typical archaeologist.

Thanks, however, to research into self-driving automobiles, however, the price of LIDAR just plummeted. What was once an $80,000 sensor (for the self-driving automobile) weighing 13 kg, just dropped to about $500 and 600 grams (less than 1.5 lbs)! The range just went from about 80-120 meters to 200 meters which will provide sub-centimeter accuracy!

With a UAV and the right software and GPS, an archaeologist could fly a grid pattern over a few acres in about 15 minutes. Bring the UAV home, pull the SD card, insert it in a laptop, and georeference a point cloud into ArcGIS for a centimeter level view of the site she’s standing on! Imagine being able to detect cemetery depressions, historic road beds, hearths, living spaces for prehistoric sites, stone box graves, and more! 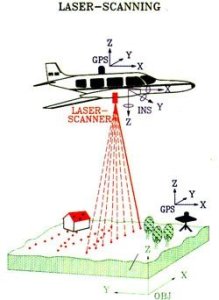 The way LIDAR works, in a nutshell, is by shooting millions of laser beams to the ground (or building if you use it horizontally). The wavelength of the beam changes because of the distance of the return, and creates a point. Archaeologists are interested in “last returns” since this is the ground level, but the data is useful for biologists, foresters, etc. since it can capture tops of tree canopies, undergrowth, and so on.

I predict that archaeologists 10 or so years from now will be using UAV mounted LIDAR for much in the same way they’re using GPR, and electrical resistivity today. It makes sense to use these kinds of techniques in order to avoid unnecessary digging or even digging at all since archaeology is necessarily a destructive process. At the very least, this is one more tool that can give the archaeologist information on where to focus an excavation rather than trying to guess by putting in test pits.

Plus, LIDAR is freaking cool.