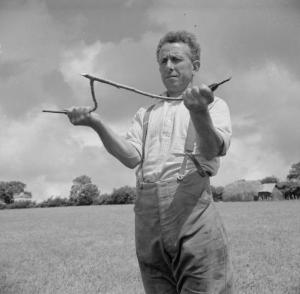 I have previously written about dowsing, once recently and once not-so-recently. The first time was a couple years ago about a story I discovered of “grave dowsing” in which a land owner tried to defeat his local or state government’s attempt to take a portion of his land through imminent domain in order to widen a road. It was either his corn field on one side or the homeowners on the other. He argued that there was an historic cemetery in the field (which he was plowing?) and he knew this because he “witched it” with dowsing rods. Ground Penetrating Radar found no such cemetery, nor could one be found in historic documents. The second, more recent, mention of dowsing was after reading Hume’s Historical Archaeology ((Noel Hume, I. (1969). Historical Archaeology. New York:
Knopf)) and noticing a mention in it of “angle rods.”

In reading another text, also titled Historical Archaeology, but this time by Charles Orser and Brian Fagan, I’ve noticed yet another mention of dowsing. This text, written by two rock-stars in the world or archaeological literature, takes a somewhat more cautious stand on the topic. Written in 1997, they have this to say:

We should mention a distinctly low-tech detection method–dowsing. Some people can find underground water using a forked stick, In a similar procedure, others use two bent, metal coat hangers, which they prefer to call “angle rods,” to locate buried metal objects and substantial underground features, such as stone walls. Ivor Noel Hume introduced dowsing to historical archeology in the 1950s, and wrote about it in his well-known book Historical Archaeology. He mentions having success with the method at Colonial Williamsburg, but does not elaborate. But he tells us he felt “a little idiotic walking across a field intently watching tow pieces of coat hanger.” perhaps his most curious discovery was that 80 percent of men can make dowsing rods work, but hat only 30 percent of women can use them successfully. Perhaps this say s more about how is will to walk around archaeological sites looking idiotic, than about anything else! ((Orser, Charles and Fagan, Brian (1997) Historical Archaeology, Prentice Hall, NJ. pp. 138-139)).

Or that men are more susceptible to idiomotor effect.

Orser and Fagan then point me toward another text as they conclude:

The authors of Dowsing and Church Archaeology ((Bailey, R. N., Cambridge, E. and Briggs, H. D. (1988).
Dowsing and Church Archaeology. Wimborne: Intercept)) complain that professional archaeologists have “bitterly attacked” them as occultists because their technique has “no underpinning theoretical explanation.” These British dowsers swear that their method of subsurface surveying works, and they provide a serious argument for it. We present dowsing here, not because we have every tried it or, for that matter, even believe that it works, but because it is an unusual method that some historical archaeologist[s] have used with apparent success. Perhaps some day all archaeologists will include “angle rods” in their tool boxes!”

Placing the Church Archaeology text aside for now, I’m wondering if dowsing is getting a more skeptical eye from authors of mainstream archaeological texts, so I picked up my copy of Renfrew and Bahn’s Archaeology: Theories, Methods, and Practice (1991). On page 97 the authors say:

In concluding this section on subsurface detection, we may refer in passing to a controversial technique that has a few followers. Dowsing (in the U.S. witching)–the location of subsurface features by holding out a twig, copper rod, coathanger, pendulum–has been applied to archaeological problems for at least 50 years, but without being taken seriously by mot archaeologists. In the mid-1880s, however, it was used in a project to trace medieval church foundations in Northumberland, England, and the skeptical archaeologists involved became convinced of the technique’s validity. While keeping an open mind, most archaeologists remain extremely doubtful. Only excavation can test the predictions made, and in the church project digging confirmed some of the dowser’s predictions, but not all of them: this is hardly surprising, since a dower often has a good chance of being right–either the feature is there or it is not.

So, it would seem, that as each decade passes, authors of mainstream archaeological texts show more skepticism on the topic of dowsing. The more recent 6th edition of Renfrew and Bahn also lists “dowsing” in the index, but not having this edition, I’m not sure what they say. I’ll certainly turn to the page next time I see it on the shelf. I’m hopeful that they’ve increased their skepticism.

Meanwhile, the journal Archaeological Prospection published a skeptical review of dowsing as method in 1998 in which Martijn van Leusen((van Leusen, Martin (1998). Dowsing and Archaeology. Archaeological Prospection, 5, 123-138)), took the authors of Dowsing and Church Archaeology (Bailey et al 1988) to task for their poor methodology and lack of explanation for the mechanisms behind their tests of dowsing. Van Leusen points out the tendency for the Bailey et al to set parameters, allow the dowsers to record their hits, then move the goalposts somewhat to redefine what consists of a “hit” or a “miss.”

For instance, two excavations trenches were opened to specifically test the dowsers’ results. At one, a wall foundation was uncovered. At another, no remains were found. And, at a third location, apparently not excavated, an apse was predicted though none was present. One hit; two misses. Bailey et al, however, consider them two hits and one “undecided” since documentary evidence indicated a temporary wooden structure was at one of the “misses” and an apse was actually destroyed and completely removed in antiquity at the other. They argued that the dowsers picked up the “imprints” (whatever that might be) of these now missing features.

Van Leusen concluded that the authors of Dowsing and Church Archaeology did well in describing the actual archaeology, which is what got the book past some reviewers, but they remained “vague” with the dowsing tests that not finding archaeological features would have been surprising. Old churches and the sites they’re constructed on are palimpsests of archaeological data. Instead of looking for a needle in a haystack, Bailey et al were showing the world how they were successfully able to find needles in piles of needles.

All scientifically controlled tests–where properly established test protocols, blinding, and controlled conditions are in use–show that dowsing is bunk. It doesn’t work. But it does seem to have more sympathy from people in the archaeological community than it might find in other fields of study. Admittedly, this sympathy does appear to have waned much of the last few decades. But I’ve personally encountered it’s use among lay-people, and have talked with archaeologists who still admit “there seems to be something there…”