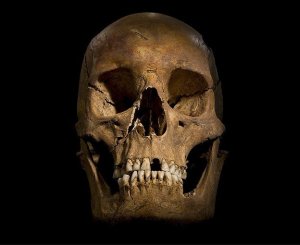 I’m a little late with this, but I’ve been busy all day. The remains found at a carpark in Leicester, England have been confirmed to be that of King Richard III by Richard Buckley, lead archaeologist of the University of Leicester: “It is the academic conclusion of the University of Leicester that beyond reasonable doubt, the individual exhumed at Greyfriars in September 2012 is indeed Richard III, the last Plantagenet king of England.”

This is interesting on many levels, not the least of which is the efficiency and accuracy a team of archaeologists and historians pinpointed first the location of the Greyfriars friary where Richard was alleged to be buried as well as the methods the team used to methodically excavate and locate the grave itself. Still, there was an element of chance woven into this story. The carpark was apparently the last open space, so if the friary’s garden wasn’t located within it, chances were good the grave would have not been located.

Then there’s the matter of confirming the remains. Researchers did so by sampling the DNA of the remains and then matching them to the last known survivor of Richard III’s maternal-ancestral line. Canadian born Michael Ibsen is a direct descendant of Anne of York, Richard’s elder sister. Michael, himself, has no sister, so the mitochondrial DNA (mtDNA), which is only passed along the maternal line ends with him. Had Anne of York’s maternal line ended a generation earlier, or had the discovery of the remains come a generation later, the identification probably wouldn’t have been made.

In addition to the mtDNA, there are some other identifying features of the skeletal remains, including scoliosis, which deformed Richard’s spine. King Richard III has been historically described as being physically deformed and with “one shoulder higher than the right.” The spine found in the grave seems to confirm this. In addition, the skull shows signs of mortal injury, perhaps with a haldberd as indicated by Jean Molinet, the Burgundian chronicler that accounted such a death after King Richard’s horse became stuck in the marsh. Overall, the skeleton had 10 wounds, 8 of them on the skull.

There is much, much more to the story of Richard III. I’ll let you google it… I’ll note one interesting point then leave you with a question: the excavation revealed that the hands were crossed in front, as if they were tied together. This is apparently an unusual pose for a burial of this time. The nature of the wound, if it occurred while he was on horseback (as history has told) would have been severe enough that he would likely have died before his body hit the ground.

So why tie the wrists?