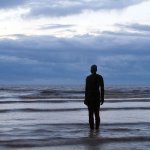 I don’t know if this poem even has a name, but it’s by Richard Feynman. He read it at his “The Value of Science” address to the National Academy of Science in 1955.

It’s always been a poem that’s had a lot of appeal to me over the years and I had the occasion to pull it back up from my notes where it has been collecting dust for too long. I thought I’d share it here.

There are the rushing waves
mountains of molecules
each stupidly minding its own business
trillions apart
yet forming white surf in unison.

Ages on ages before any eyes could see
year after year
thunderously pounding the shore as now.
For whom, for what?

On a dead planet
with no life to entertain.
Never at rest
tortured by energy
wasted prodigiously by the sun
poured into space.

A mite makes the sea roar.
Deep in the sea
all molecules repeat
the patterns of one another
till complex new ones are formed.

They make others like themselves
and a new dance starts.
Growing in size and complexity
living things
masses of atoms

DNA, protein
dancing a pattern ever more intricate.
Out of the cradle
onto dry land
here it is
standing:

atoms with consciousness;
matter with curiosity.
Stands at the sea,
wonders at wondering: I
a universe of atoms
an atom in the universe.