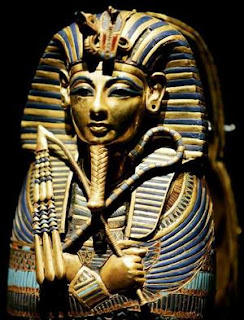 Goldâ€”everywhere the glint of gold! These were the words of Howard Carter as he recalled first seeing the antechamber of Pharaoh Tutankhamen’s tomb as he flicked his flashlight back and forth. Revealed to Howard Carter and Lord Carnarvon were effigies of Tutankhamen himself, falcon-headed figures, a golden throne, overturned chariots, a gilded snake, and other treasures. It must have been a terrific sight -one that most archaeologists never come close to seeing as they meticulously dust and scrap matrix away from broken potsherds and dull-by-comparison hearths. And today, November 4, marks the anniversary of Carter and Carnarvon’s discovery of Tutahnkamen’s tomb, perhaps the single most celebrated pharaoh of ancient Egypt.

And this week, archaeologists removed Tutankhamen’s mummy from its sarcophagus, placing it on display in a climate controlled display case. According to the BBC, “only about 50 living people have seen the face of the boy king, who died more than 3,000 years ago” until the display that took place today. Part of the reason for the new venue is due to the heat and humidity introduced into his tomb each year by tourists. But I’m sure another consideration is revenue:

“The golden boy has magic and mystery and therefore every person all over the world will see what Egypt is doing to preserve the golden boy, and all of them I am sure will come to see the golden boy,” Egypt’s antiquities chief Zahi Hawass told reporters before the body was moved. 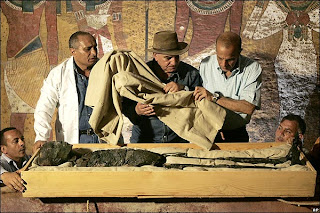 Howard Carter and his team (Lord Carnarnvon died a few weeks after the tomb was opened from an infection brought on by a mosquito bite, giving rise to the “curse” myth) set a standard for meticulous excavation of the tomb. It took him nearly a full decade to photograph and record all the details of Tutankhamen’s tomb which contained 5,398 items! This, in spite of the fact that thieves made off with at least 60 percent of the original jewelry based on calculations made from comparing the 200 or so pieces that remained with packing inventories. Most of these that remained were actually in Tut’s sarcophagus and wrapped in his linens.

The mummy itself didn’t fare so well by today’s standards of excavation, however. While removing the treasures, Carter dismembered Tutankhamen and “used hot knives and wires to remove the gold mask which was fused to Tutankhamen’s face by the embalming process.”

Tutankhamen was actually laid out in the sun so the heat would soften the resin and allow the team to remove the wrappings and the artifacts. 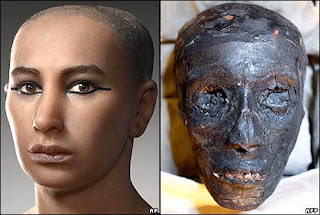