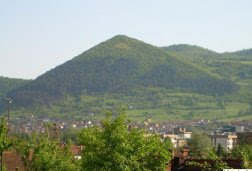 Not a pyramid at all but rather a “natural formation,” says the Bosnian Culture Minister, Gavrilo Grahovac. So they’re pulling the plug on self-proclaimed, “amateur archaeologist,” Semir Osmanagic, who, for a little over a year now, has claimed that the geologic formations as Visoko, Bosnia are pyramids built by people in antiquity.

If true, the “pyramids” would be the largest in the world. However, not a shred of viable evidence has been produced to support the claim, which seems to be just so much fantasy generated by myster-mongers and significance-junkies. Read some of the details and a link to the story below the guide.

I found the article in the “World” section of the Croatian online news site, Javno, the exact url is here.

And the Javno article was refreshingly critical of the Osmanagic claims. And, by “critical,” I mean they gave a reasoned account of the situation compared with the mass-media attention of about a year ago.

The Culture Ministry found the “research” conducted by Osmanagic’s team to be questionable and the collaborators of Osmanagic to lack the credibility needed to allow for continued funding of their “project.” Also criticized by the Bosnian government, according to Javno, is the methods by which Osmanagic et al presented their findings, particularly the fact that they routinely kept their data from experts in relative fields.

The Bosnian Culture Ministry consulted experts including those in the fields of geology, mining, archaeology, and cultural preservation and arrived at the conclusion that Osmanagic’s foundation was not acting in the best interest of Bosnian cultural preservation and that the foundation is in violation of archaeological regulations. The Ministry even concluded that the nature of Osmanagic’s registration with the Bosnia-Herzegovina Justice Ministry may be suspect and should be “looked into.”

According to Osmanagic, his reckless destruction of the site (which does have legitimate cultural resources of the Roman period as well as perhaps others) is justified due to the “positive image” he’s created of Bosnia-Herzegovina in the world.

Personally, I’d have to disagree, since the image being created was potentially one of ridicule among serious academia. But this recent position of the Culture Ministry is one to be respected and it’s good to see truth and reason win out against pseudoscience and woo. I don’t know if the Ministry’s protection can extend to lands that are on private property or controlled by local governments, but it is certainly having the effect of keeping Osmanagic’s band of woo-woo’s from destroying cultural resources on much of the hill. According to Osmanigic’s woo-woo site, they are resuming “excavations” as of 28 June 2007 on local government controlled lands.

One can hardly blame local governments from trying to continue cashing in on Osmanagic’s nonsense since it is drawing tourism to the region. And, to be honest, the current situation isn’t much different than that of a typical cultural context in the United States, where private land owners are free to allow looters and idiots to ravage archaeological sites, plundering valuable pottery and lithic artifacts while completely ignoring the more culturally valuable contexts of these artifacts. I think, however, that many local governments are influenced by whether or not they receive federal funding, which may impact how they are required to preserve cultural and historical resources.

Meanwhile, Osmanagic and his foundation of woo are the continued laughing stock of the archaeological community -or, perhaps they would be if it weren’t for the fact that they are endangering genuine cultural resources with their pseudoscientific endeavor.