The Epic of Gilgamesh is a story of heroism and adventure that still has an appeal to the reader today, suggesting that the human need for fictional identification with heroes and adventure is one that has possibly always existed. Keeping this in mind can help when the epic as a whole is examined and its parts dissected to reveal its origins. It can also benefit the reader of related Mesopotamian and Near Eastern Myths as motifs and themes find their way from one to another across time and space. 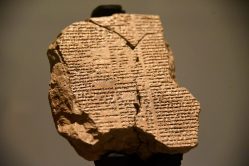 The standard version of the Gilgamesh Epic is comprised of written and oral stories and tales that originate from Sumer but were probably collected and redacted by one or more Akkadian scribes, perhaps Sin-leqe-unnini of the Kassite period whose name is known because he signed his work. But Sin-leqe-unnini didn’t invent the epic. Earlier Sumerian stories include Gilgamesh as the central character, such as Gilgamesh and the halub-tree, Gilgamesh and Huwawa, and The Descent of Inanna to the Underworld. In these and other stories, themes and events are drawn from to create the Akkadian epic where Gilgamesh, part god, part man, teams up with Enkidu who is created by the gods to provide a balancing companion to Gilgamesh. Throughout the epic, many themes are dealt with by Gilgamesh: friendship, honor, life, death, loss. But it is, perhaps, human mortality that becomes the central theme as Gilgamesh deals with the death of his friend and explores the concept of immortality with Siduri, the wine maker, in tablet ten and Ut-napishtim in tablets ten and eleven. To them both he asks, “Am I not like him [Enkidu]? Must I lie down too, never to rise, ever again?” And to both of them he says, “I was frightened. I am afraid of death.”

In the Old Babylonian version, it is Siduri where Gilgamesh’s journey ends rather than Ut-napishtim. As with Enkidu, who was humanized by a harlot, Gilgamesh is humanized by a woman (an ale-wife or wine-maker). The addition of the Ut-napishtim story, however, is significant and it imparts the significance of the flood event that is regarded in many Mesopotamian and Near Eastern stories as one that was initiated by gods to “cleanse” the land of wicked or just annoying humanity.

Other stories that included the subject of wide-scale flood, which displaces or wipes out humans that inhabit the world include the Myth of Ziusudra, Atrahasis, and Genesis, through which there are many similarities and distinctions. The similarities are interesting and useful to students of mythology and anthropology for obvious reasons, since the motifs can be traced through space and time giving evidence that these cultures had ties to each other. The distinctions are, likewise, useful but perhaps for less obvious reasons. Where the stories depart can show how cultures evolve, differ, or intentionally accept or reject the motifs of other, contemporaneous or preceding cultures.

In looking first at the similarities, the evolution of the flood myth can be examined. Ziusudra, from a Sumerian tablet dating to around 1600 BCE, provides a flood myth among the oldest in known literature. In it, the gods have decided to destroy mankind and one of the gods warns Ziusudra (Sumerian for “extra-wise,” which is the same meaning of the Akkadian name Atrahasis). Ziusudra escapes the flood, which lasts seven days and seven nights by boat, to the island of Dilmun, where he prostates himself before the gods.

The Atrahasis story, found on Akkadian tablets dating to about 1650 BCE, depicts the same hero in the same situation. Atrahasis is warned by Enki of the impending flood, speaking to him through a wall, and instructed to build a boat for he and his family to escape the flood which lasts seven days and seven nights.

The second Akkadian version, found in Gilgamesh, refers to the survivor as Ut-napishtim by name, which means “he 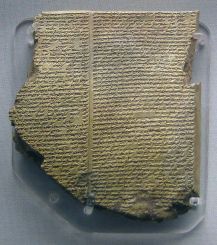 found life,” though he is referred to once as Atrahasis in tablet ten, line 187 of the standard Babylonian version. Ut-napishtim weathers only six days and seven nights in the flood, however, and lands his boat on Mount Nisir (a.k.a. Nimush) rather than the island of Dilmun (perhaps Bahrain) or the confluence of the Tigris and Euphrates.

Dalley (1989) suggests at one point that the Ziusudra myth “appears to be a relatively late composition based on an Akkadian version of the story,” but acknowledges that the flood motif was one of Sumerian origin and was effectively incorporated into Atrahasis. The dating of the tablets themselves cannot date the individual stories—they only reveal when they were scribed to clay for a given tablet. Oral traditions likely predate the cuneiform traditions and, thus, the flood motif may have existed long before the technology of writing. That the Akkadian culture is using Sumerian gods to tell a Sumerian story is interesting, but examination of the differences might give further insight as to which story follows which.

Ziusudra reports that the boat lands on the island of Dilmun whereas Atrahasis has the landing at “the mouth of the rivers,” meaning the Tigris and Euphrates, which come together over 300 miles from Bahrain, and is often suggested as the island of Dilmun. But since Arab tradition holds that these two rivers flow beneath the sea only to emerge at the surface at Bahrain where they provide a “miraculous supply of sweet water,” it is still possible that Bahrain is the intended location of Dilmun in the Atrahasis story. The Sumerian and Akaddian versions would seem to have a common progenitor, which is obviously Sumerian since the central figures are Sumerian as are the geographical details.

The Gilgamesh epic adopts the flood motif, with slight embellishments. The name, Ut-napishtim is contextually important since Gilgamesh is searching for immortality and it is the Flood survivor, Ziusudra (“extra-wise”) who finds it, thus living up to the new name, Ut-napishtim, which translates to “he found life” on at least two levels: surviving the deluge intended by the gods to destroy mankind; and granted immortality by the gods. The addition of the

] is traditionally translated to mean the mountain, Nisir, which reaches 9,000 feet. But if KUR is referring to something other than “mountain,” such as land or country, then

may have been derived from KUR NI?IRTU, meaning “hidden land/country” or “secret land/country,” which is contextually consistent with the motif since the legend of Dilmun includes a Utopist perception of a place that is holy and, thus, removed from the profane. Dilmun is “pure,” “pristine” and “virginal” according to The Myth of Enki and Ninhursag.

I don’t pretend to be an expert on either cuneiform or ancient Mesopotamian languages and spent little more than a few collective hours looking over some of the scripts and translations involving Gilgamesh and other ancient texts. I wouldn’t even consider myself a novice in the field and I defer willingly to any input others who’ve spent much more time at this than I. The more I look at ancient cuneiform, however, the more I’m fascinated.

I’ll post Part II in a day or so, where I’ll look more closely at the flood myth in Gilgamesh and how it relates to other Mesopotamian texts, including the Noachian myth. I’ll also include a short bibliography that I used for those interested in following up or finding additional sources.