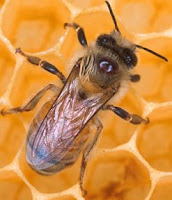 Probably not. But honeybees everywhere are disappearing. They aren’t dying in their hives. They’re leaving and not returning, absconding the hive only to leave it with a queen and a small brood. I’ve recently listened to a few podcasts that discussed the matter with various experts in the field and read a few articles on the subject, some available on the Internet. Below the fold is a short discussion of CCD and some resources on the topic that I’ve found.

In the 1898 and again in both the 1960’s and 1970’s, bee colonies experienced what was known as “dwindling disease.” But since the 1980’s, problems for bee keepers have increased. Its become harder and harder to maintain bees than ever before as beekeepers struggle to fight parasites and malnutrition and, perhaps, just some traits that are being selected out accidentally as preferable traits have been selected for.

Mites have been a problem, particularly since the Varroa mites were unintentionally introduced from Asia in the 1980’s. Varroa mites suck the blood of bees, weakening and shortening their lifespan. Infestations of Varroa aren’t evident, however, since previous infestations leave dead bees in the hive and the bodies can be examined to reveal the mites.

For the last 20 years, the biggest issue for beekeepers has been the varroa mite, first noticed in the United States in 1987. Once infected, an untreated hive can be totally wiped out in a few months. “Varroa mites are public enemy number one for bees,” says [Jeff] Pettis [,USDA scientist]. The mites have nearly eliminated feral colonies of honey bees, which used to pollinate many vegetable crops. Many farmers must now rent bees for pollination, which has contributed to the growth of large-scale beekeeping; since the late 1980s, the number of colonies has expanded by 25% to 2.5 million.

One spurious hypothesis involves cell phone towers. The proponents of this suggest that radiation from the towers and cell phones are affecting the bees and their navigation. But studies on the issue have not shown any connection between cell phone radiation and bees. The correlation is spurious and without supporting data. Moreover, many, if not most, of the bee colonies that have disappeared were in regions where there simply is no cell phone service.

So what’s the big deal about bees anyway?

The honeybee is more than just a source of honey for sopapillas, marzipan, and fried chicken -it’s essential to pollinating crops for human consumption. Bees pollinate billions of dollars worth of crops each year, including cucumbers, squash, almonds, apples, cherries, strawberries, melons, peanuts, cotton, soybean, and many, many more. Charles Heatherly, president of the N.C. State Beekeepers Association says bees pollinate “one-third of the food we eat.â€

Severe bee losses do appear to be a widespread problem (see map, above). Some 29% of 577 beekeepers across the country reported CCD and losses of up to 75% of their colonies in the last 16 months, according to a survey run by Bee Alert Technology in Missoula, Montana. Losses range from 35% to 100% of hives in each operation. Other countries are also having problems with rapid losses of wild and domesticated honey bees. In Europe, beekeepers from Spain to near the Arctic Circle are reporting deaths or disappearances of their insects, but the symptoms aren’t exactly the same as in the United States.

Still, honey bee researcher Nicholas Calderone of Cornell University says it’s not clear that these collapses are something other than normal losses. “We’re getting a lot of reports of CCD that are not narrowly defined,” says entomologist Robert Danka of the USDA bee lab in Baton Rouge, Louisiana.

Because of this, there have been some recent headlines and stories leading with a quote attributed to Einstein: “If the bee disappeared off the surface of the globe then man would only have four years of life left.”

This quote is completely unverified, however. According to Snopes.com [Einstein Bees], the first known source of the quote was in 1994 in Brussels when beekeepers staged a protest. No earlier source can be definitively attributed to Einstein, who was, of course, a physicist not an entomologist.

Researchers have removed combs from the hives and irradiated them without bees, which seems to encourage bees to return to the hives.

[USDA scientist Jeff] Pettis and his colleagues took combs from CCD-affected colonies in Florida and gamma-irradiated or fumigated some of them before inserting the combs into hives with mite-free bees imported from Australia. Six weeks later, the scientists counted the number of missing brood cells as a measure of colony health. Because the hives with the irradiated combs had fewer missing brood than ones receiving untreated combs had, Pettis suspects pathogens as a possible cause of CCD.

Migratory beekeeping is essential to pollinating crops in agriculture as well as keeping the hives alive, since the hive will be affected by periods of pesticide use on the crops, necessary to control destructive insects post-pollination. The practice also ensures that the hive can avoid harsh weather and that crops around the nation are pollinated. Almond crops in California, for instance, rely almost exclusively on bee pollination. Dry seasons in states that the bees winter mean fewer flowers; fewer flowers mean less nectar; less nectar means less produced honey and more reliance on artificial foods like sugar water. It may be that the bees are overly stressed and weakened by their moves and are being malnourished. But this doesn’t explain losses of bees colonies that don’t migrate.

It may be that there’s a “perfect storm” of circumstances that is affecting the honeybee, if I can quote Karl Mogel of The Inoculated Mind (who guest-hosted with Kirstin and Justin on TWIS below). Bees are fed artificial food in the form of sugar water and pollen substitutes that are high in protein since the honey is being harvested and the crops themselves are low in pollen and don’t produce enough pollen to allow the bees to create enough honey to get them through the winter. Also, the migration itself is stressful and may be affecting the bees. Other issues include insecticides that the bees may be exposed to prior to, during or after their moves, but this is also one of the reasons they’re moved: to prevent exposure. And, what about the bee losses that are found in organic apiaries.

Is CCD caused by the verroa mite? Is it an as yet unknown pathogen? Is it poor nutrition? Could it be the stress of migration? Have pesticides finally started taking their toll on helpful insects as well as the destructive? Or is CCD a result of a combination of these, the “perfect storm” of circumstances that is causing the dying off of the bees?

Certainly it isn’t a “bee rapture,” but the disappearance of the bees is strange. Its a mystery since the bees abscond and don’t return to die, leaving the queen and only a small brood behind. Other bees don’t take over the hive nor do they raid the honey as is expected with known pathogens or with weakened colonies due to harsh winters.

But wouldn’t it be the supreme irony if there was a God and it was the honeybee that was his “chosen” and not humanity?