I‘ve read a few other science bloggers who are posting some basic concepts articles, clarifying specific topics in their fields of endeavor at a level designed to reach the lay person. It hasn’t escaped me that a large portion of my visitors reach me through search engines and may be students or the generally interested who are looking for basic information. So I thought it might be useful for some visitors if I create a basic concepts post of my own and, depending on the number of hits it gets, I may continue the series. Of course, I’d be willing to accept any questions or suggestions for future topics and hope that each topic sparks questions and comments.

Why study pottery and ceramics in archaeology? Look below the fold and see…

The Basic Recipe
At a minimum, pottery includes three ingredients: clay, a tempering agent, and water. The water and clay are mixed to form a paste and another substance is included to strengthen the mix and improve firing characteristics. Substances other than the original clay in the pot’s material are referred to as inclusions, including the temper, but not all temper are inclusions. Temper generally refers to material that’s intentionally put in the mix for a specific purpose -all other inclusions are accidental. Mineral from the clay source, sand, gravel, grass, insects, ash from firing, etc. can all find their way into the pot’s mix.

Once the paste is created, the next step is to shape a pot. The most basic pottery is hand-formed -perhaps a small vessel pressed into a bowl shape. A more advanced form is made by coiling rolled out strips of clay into the final form, smoothing the interior and exterior as the potter gos along. Further advanced forms of pottery are thrown on a wheel, spinning the lump of clay while the potter shapes the vessel, thinning the wall and building up the vessel with a skilled and patient hand.

Once the basic shape of the pot is formed, the exterior can be treated before firing to give the pot a stylistic representation or functional form. Slips are very watery clay that’s painted on the surface, often giving a different color that allows the potter to create a design. But slips are also functional in that they seal the pot, allowing the vessel to better hold liquids. Glazes can be added for much the same reason, but will create a glassy surface that is more watertight. This is achieved by adding substances like tin or lead. Other decorations can be added to the exterior of pottery through punctations, incisions, embossments, stampings, and burnishing. Pots can be very simple or extremely elegant. 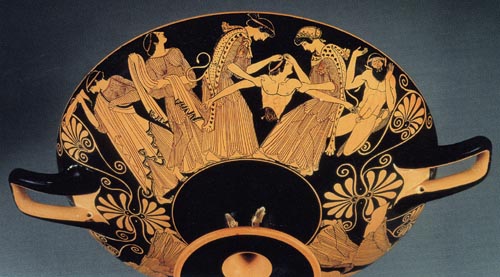 The Finished Product
Once the basic form is created, the slip or glaze added and other decorations applied, the pot is ready to be fired. This could include the use of an enclosed oven with an open top or a pit where the fuel is stacked around the pottery. A potter was likely to create many pots to be fired, since there was always a risk of a pot exploding or cracking during the process. Broken bits of potter could be used to segment the kiln, protecting against fragments from neighboring pots that do explode. Also, the positioning of pots and fuel, and type of fuel used affected the oxygen levels in the kiln, which in turn affect the metallic oxides in slips and glazes, thus producing varied results in color and luster.

Summary
When examining the ceramic remains of a society, archaeologists are able to determine dates, levels of stratification, trade patterns, technological innovation, religious affiliations and beliefs, and so on. Analyzing form and function can lead archaeologists to discover things about economic activities in a given society and being able to distinguish between utilitarian and ceremonial functions can offer clues to the status of individuals in burials or residents of a home. Analyzing pottery styles can reveal the nature of restrictiveness a society had: standardized style can imply formal and rigid expectations from the society; less standardized and formal styles could imply fewer societal controls on the potters. Style can also reveal trade patterns and evidence of contact with other societies as trends and fads “catch on” as they are diffused from one society to another. Similarly, technical analyses of a pot’s paste can provide evidence for trade patterns as a pot’s paste is matched to clay deposits many miles away and

< li>kiln – an oven or pit used to fire, or heat, finished pots to a high temperature which strengthens the pot and vitrifies a slip or glaze.