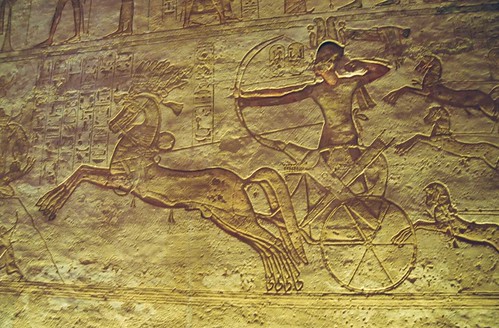 Chariots are frequent subjects of Egyptian art and are nearly always depicted as an instrument of war or hunting with the Pharaoh in a grand pose about to lay waste to an enemy or slay a wild beast (fig. 1). Among the many representations of chariots in Egyptian art, are those found in the tombs of Ahmose at Abydos (Spalinger 2005), the Userhet, a royal scribe of the 18th Dynasty (Lloyd 1961), Khaemhet, Amenhotep Huy (Smith 1998), Tutankhamen (Smith 1998; Partridge 1996; Littauer & Crouwel 1985), and Thutmose IV (Partridge 1996) among others. Chariots are also found in temple art such as the depictions of Seti I on the exterior wall of the Hypostyle Hall at the temple of Amun at Karnak mounting his vehicle then trampling his enemy at Kadesh (Partridge 1996; Smith 1998). There are also a few artifacts of chariots that have proveniences from the pharaonic tombs of Amenhotep II, Thutmose IV, and Amenhotep III as well as the tomb of Yuya and Thuya, the parents-in-law of Amenhotep III (Littauer & Crauwel 1985; Partridge 1996). The first intact chariot was discovered in 1829 in a tomb whose owner remains unknown and is now on display at the Museo Archeologico in Florence, Italy (Littauer & Crouwel 1985). The Florence Chariot (fig. 2) has wheels of four spokes and is considered to be of earlier construction and design than other chariots found, which have six spokes (Partridge 1996).

While the exact date of the Florence Chariot’s tomb may not be known Partridge (1996) suggests that it probably originated from early in the 18th Dynasty, there is epigraphic evidence of chariot use in Egypt during the reign of Ahmose I at the beginning of the same Dynasty. In the biography left in the tomb of Ahmose, son of Eben, a military elite under the Pharaoh Ahmose and later Thutmose I (Spalinger 2005; Pritchard 1958), descriptions of his exploits in expelling the Hyksos from Egypt include mention of chariotry, though in a brief, even casual manner:

“I served as soldier in his place in the ship, “The Wild Bull,” in the time of the Lord of the Two Lands: Neb-pehti-Re, the triumphant, when I was (still) a boy, before I had taken a wife […] But after I had set up a household, then I was taken on the ship, “Northern,” because I was valiant. Thus I used to accompany the Sovereign -life, prosperity, health! -on foot, following his excursions in his chariot” (Pritchard 1958, p. 173).

Ahmose, son of Ebana, makes no direct mention of Egyptian use of chariots as war machines or in battle and Pritchard comments that the chariot is introduced to the Egyptians by the Hyksos.

The Hyksos first appear in Egypt during the Second Intermediate Period, 1782-1570 BCE (Brewer & Teeter 1999), and began occupying the Eastern Delta region. The term “Hyksos” is derived from hk hswt, referring to “foreign rulers” of Asiatic lands. Van Seters (1966) discusses in detail the argument of Wolfgang Helck that the Hyksos were of Hurrian or Indo-Aryan origin and part of an invasion or massive immigration with the intent to occupy and dominate Egypt, based largely on the account of Manetho as retold by Flavius Josephus. Van Seters contends that Helck’s arguments are dubious and speculative and notes that the linguistic, archaeological, and epigraphic evidence points to Semitic, probably Canaanite, origins for the people that have come to be known as the Hyksos. Van Seeters argues that the name Salitas as indicated by Manetho is the Semitic title “sultan.” Likewise, he points out that the name of a slave given to Ahmose, the son of Ebana, is Ishtar-ummi, and of West-Semitic origin. Ahmose, son of Ebana, participated in several raids on Avaris in which he took hands of his enemy as well as live captives, which Ahmose, the Pharaoh, awarded him as slaves along with “The Gold of Valor” on at least two occasions (Pritchard 1958).

The Hyksos, however, are frequently attributed as having introduced the chariot and the composite bow to the Egyptians (Lloyd 1961; Van Seters 1966; Brewer & Teeter 1999; Drews 1993; Partridge 1996; Spalinger 2005). Van Seters concedes that this is a compelling argument for the possibility of at least an element of Hurrians within the Hyksos, which isn’t a term specific to a single ethnicity to the Egyptians, but to foreigners in general, particularly Asiatics (Van Seters 1966; Brewer & Teeter 1999). As already noted, the chariot was described by Ahmose, son of Ebana, in context of the siege of Avaris by Pharaoh Ahmose. But warfare at this point depended upon rapidly moving large numbers of troops via ships on the Nile (Spanlinger 2005) rather than attacking with fast-moving chariot divisions. Indeed, Spalinger along with Littauer and Crouwel (2002) point out the difficulty that chariots would have on any terrain but smooth, level and dry surfaces. The Nile Valley itself is considerably less forgiving to the easily tipped or stuck in the mud chariots and devoid of the wide-open spaces characteristic of Syria and Palestine, which would be faced by Egypt later (Spalinger 2005). Littauer and Crouwel (1985) make note of the “second stela” of Kamose and its mention of the “chariotry” of the pharaoh’s enemies, but they also raise the question of interpretation of that stela. His Hyksos enemies may or may not have had chariots, but it seems reasonable to assume, however, that Pharaoh Kamose might have when evidence exists that his brother and successor Ahmose did (Harvey 1998).

Battle scene fragments from the walls of the Ahmose Temple at Abydos (fig. 3) are close in composition to those of the temples of Thutmoses I and II (fig. 4) such that the later Thutmoside scenes may have been influenced by those at the Ahmose Temple. The Ahmose images clearly indicate four-spoke wheels, while some Thutmoside images show four-, six-, and eight-spoke wheels. Those of the pharaoh in Thutmoside images are clearly eight-spoke wheels, while the Asiatics in the same images are depicted as much smaller in stature than the pharaoh and their chariots have only four spokes (Harvey 1998). The Ahmose Temple images are the earliest depictions of chariots in Egypt (Harvey 1998; Spalinger 2005) and include no depictions of Hyksos chariots nor does the biography of Ahmose, son of Ebana, speak of chariots used by the Hyksos.

The chariot, however, is certainly an imported technology from outside Egypt and from the East based on design and materials (Littauer and Crouwel 2002, 1985; Partridge 1996; Spalinger 2005). According to Littauer and Crouwel the Egyptian chariot followed design trends of Assyrian models in being “small, fast two-man” vehicles (2002) and assert that both the chariot and the horse in Egypt are imported from the Levant (1985). Partridge notes the materials used in chariot construction, such as elm and birch, were not native to Egypt and implied some level of trade with sources outside of Egypt. According to Spalinger, the Asiatic and Egyptian chariots of the early 16th and 15th centuries BCE are “virtually identical” and that their suitability for use in arid regions “should alert us to the origins out
side of the so-called ‘Fertile Crescent’ (p. 13).”

Littauer, M., & Crouwel, J. (2002). The Origin of the True Chariot. In P. Raulwing (Ed.), Culture and History of the Ancient Near East. Vol. 6: Selected Writings on Chariots and Other Early Vehicles (pp. 45-52). Leiden: Brill Academic Publishers.

Pritchard, J. B. (1958). The Ancient Near East Volume I: An Anthology of Texts and Pictures. Princeton, NJ: Princeton University Press.