It is the post-Hyksos era of the New Kingdom that begins to see chariot used on a grand scale, however. Chariots were used in large numbers at Megiddo by Thutmose III, possibly as the first chariotry division which employed archers in a mobile fashion (Brewer & Teeter 1999). Drews (1993) indicated that the Battle of Megiddo is testament that a king could make use of over 1000 chariots in a single operation and that the Battle of Kadesh was similarly provisioned with sufficient forces to face over 2500 Hittite chariots. Drews attributed the success of Ramesses II to the skill of charioteers as archers and part of two-man archer/shield-bearer teams, which was an advantage over the Hittites’ three-man chariot teams. The Hittites, according to Ramesside reliefs cited by Drews, consisted of a driver, a shield-bearer, and a javelin-thrower. Spalinger (2005) suggests that the driver, who doubled as the archer, was protected by the shield-bearer and the two men worked as a team.

Littauer and Crouwel (2002) take a stark contrast to Drews (1993) with regard to the way chariots were employed in battle. Drews maintains that Bronze Age warfare was, essentially, chariot warfare with armies facing off with divisions of chariots numbering in the thousands, augmented by infantry and runners. Littauer and Crouwel, however, contend that the chariot was expensive and difficult to maintain, required specialized training for both equids and charioteers, and was unwieldy during battle. Their position was that chariots were used as a means of “conspicuous display of great powers such as Egypt or the Hittite empire,” and a means to assist the main force of the military.

With regard to the “conspicuous displays” hypothesis, there is ample supporting evidence. Reliefs of Pharaohs with their chariots are nearly always in grandiose style with the Pharaoh depicted in the position of being about to release an arrow from his bow (Drews 1993, pls. 1, 6, 7, 9, 10; Partridge 1996, figs. 92, 97, 98, 112; Smith , fig. 364). Epigraphic accounts of the pharaohs’ chariots are equally grandiose:

“His majesty set forth in a chariot of fine gold, adorned with his accoutrements of combat, like Horus, the Mighty of Arm, a lord of action like Montu, the Theban, while his father Amon mad strong of his arms. [â€¦] [t]hen they saw his majesty prevailing over them, and they fled headlong [to] Megiddo with faces of fear (Pritchard 1958, p. 175).” 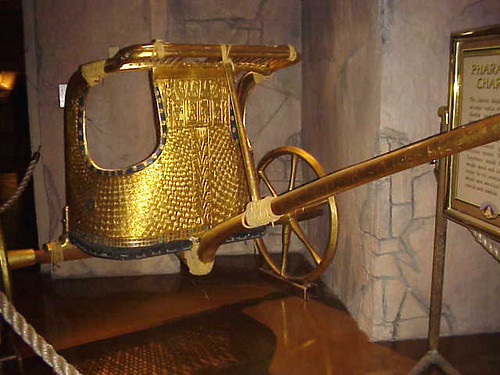 Littauer and Crouwell (2002) surmise that the chariot is limited by extremes in terrain, including mud, rocks, sand, bogs, or hilly, and would not be effective in utilitarian endeavors such as equine herding or hunting in the wild. The chariot, costly to build and maintain, would have been inferior to the mounted rider. Moreover, they argue that it would have been far easier to replace an individual horse than it would a draught team. For these reasons, Littauer and Crouwell raise the question: why the chariot? They then suggest that a “stimulus other than necessity must be found (p. 47).” The burial goods of elites, especially kings and pharaohs, in the Near East included chariots and their accoutrements according to Postgate (1994), who also construed this to mean that their value was mainly symbolic and seemed, in Mesopotamia, that chariots were part of ceremonial or ritual use for the gods. Littauer and Crouwell (2002) referred to wheeled vehicles, based on their representations, as “conveyances of the gods (p. 48).”

The tomb of Thutmose IV in the Valley of the Kings was found by Howard Carter to have still contained a chariot body, which was badly damaged by looters who stripped away the original gold or silver surface (Partridge 1996). The find was still important, however, because the underlying plaster of the body still held the images of the interior and exterior scenes that would have been rendered in precious metal. The exterior scenes depict the Pharaoh riding his chariot in battle with Asiatics, firing arrows in one scene and swinging an ax in the other. The chariot depicted in the scenes is one of eight-spoke wheels and has a quiver for arrows on either side with a bow sheath on the right. The interior scene depicts the Pharaoh as a sphinx, stepping on his enemies. Pharaohs weren’t the only elites buried with their chariots, however. The parents-in-laws of Amenhotep III, Yuya and Thuya, died at around 1365 BCE and, in their tomb in the Valley of the Kings, was a small chariot. Yuya was known to be the Commander of Chariots and the chariot itself was found with solidified lubricant derived of animal fat on the axle (Partridge 1996).

The six chariots found in the tomb of Tutankhamen are the most complete examples of actual chariots from the New Kingdom and are testament to the grandiose style of the Pharaoh with full decoration of gold inlays and were actual chariots used by the Pharaoh before his death (Partridge 1996). The chariots were completely disassembled and the pieces stacked almost haphazardly with four in the antechamber and two in the treasury of the small tomb and were labeled by Howard Carter as A1 through A6. Among the other grave goods in the tomb were accoutrements such as whips, yoke saddles, and blinkers for the horses’ eyes (Littauer & Crouwel 1985; Partridge 1996).

It has been suggested that the chariots found in Tutankhamen’s tomb are examples of superior engineering and capable of informal racing by Sandor (2004). Sandor refers to the engineering and implementation of the design of the “Tutankhamen-class” chariot to be a “remarkable achievement.” Specifically, Sandor cites the innovations of the “bow-and-arrow” horizontal shock absorber, which assists in preventing rollover as well as smoothing the ride; V-spokes of the wheels; and joint systems in the wheels that have “aircraft-like damage tolerance.”

The chariot may or may not have been introduced to the Egyptians by the Hyksos as some have variously suggested or implied both ways. It is clear, however, that the chariot was an important technology to the New Kingdom and had significance in defining or at least highlighting elite status and the chariot probably held some religious significance as a conveyance of the gods based on its inclusion with burial items.

For references, see the end of Part 1

About Carl Feagans 375 Articles
Professional archaeologist that currently works for the United States Forest Service at the Land Between the Lakes Recreation Area in Kentucky and Tennessee. I'm also a 12-year veteran of the U.S. Army and spent another 10 years doing adventure programming with at-risk teens before earning my master's degree at the University of Texas at Arlington.