***Jamestown***
A 400 year-old well in Virginia’s Jamestown is yielding artifacts that include a Scottish pistol, a leather shoe, and a plaque that reads, “James Towne.” The well, covered and filled with trash before 1617, ended up part of an addition to the first Virginia governor’s house and it may be that the well was the one described in Captain John Smith’s journal, which was dug as early as 1608. Preservation was very good in the oxygen-deprived final resting place of the artifacts in the well, which also includes plant material, seeds, and pollen as well as fabric, leather, metal objects, bones and ceramics. 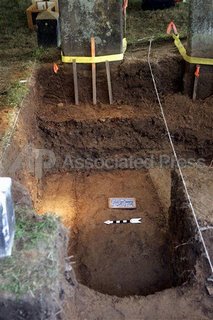 ***Venture Smith***
In Connecticut, an excavation is underway at the grave of Venture Smith, a slave turned landowner for whom a legend was built around. Green Party candidate for Attorney General, Nancy Burton, filed an injunction to stop the excavation, stating that she was doing so on behalf of the “dissenting” family members of Venture Smith, though she legally represents none. The goal of the excavation is to uncover DNA and forensic data that can help historians learn more about the legendary figure.

A good overview of this story can be read in this article, Digging for Clues to Freed Slaves Origin. a couple of quotes from the article:

Our connection to Venture is very special, and we’d like to know as much about him as we can,” said [Coralynne ] Jackson [a Smith family member] who lives in Hartford. “That includes where he’s from, because that’s where we’re from. Knowing that tells us a little bit more about who we are. That’s something that was stolen from most slaves.

Venture Smith is one of the most well-documented survivors of the North Atlantic slave trade. He was born Broteer Furro around 1729, kidnapped by slavers in western Africa when he was just a boy, and then lived in servitude first in Rhode Island, then New York and finally Connecticut.

In 1765, Smith bought his freedom from a Stonington family, and later bought the freedom of his wife and children. He eventually bought about 110 acres of land in Haddam Neck, where he cut timber and farmed. Before he died, Smith told his story to a local teacher, who published it.

Read more about Venture Smith at this Wikipedia article.

***Maya King Discovered at Waka’***
Project Leaders Hector Escobar and David Friedel (an archaeologist from SMU) and their team have discovered what may be the tomb of the founder of the royal dynasty at Waka’, a Maya site that is known in modern times as El Peru. The site was originally discovered in the 1960s by oil prospectors and has since been the focus of looters who invaded the site, cutting up stelae for easy transportation and sale. “Elevator shaft” sized tunnels were carelessly dug by looters in search of royal booty, but Escobar and Friedel have beat them out. In recent years, the site has been excavated by the Proyecto ArqueolÃ³gico Waka’, a joint American-Guatemalan effort to excavate and preserve the cultural treasures found there.

That hasn’t stopped looters from continued attempts to plunder Guatemala’s cultural history for a quick profit, however. Just the day before the tomb was discovered, looters invaded the tunnels in an attempt to steal whatever artifacts they could. The next day, archaeologists discovered the jewel encrusted remains of a king, perhaps even that of K’inich Balam, the Sun-Faced Jaguar who was married to a royal princess from Calakmul, capital of the royal dynasty of Kan, the snake people, in a marriage that forged an alliance between Calakmul and Waka’. More likely, according to project leaders, this is the tomb of an earlier king, possibly the founder of the dynasty that ruled Waka’ before the Calakmul alliance when Waka’ was 700 year trading partner of Tikal. It was the betrayal of K’inich Balam that caused the eventual destruction of Waka’ by Tikal and the desecration of stelae and monuments.

Learn more about El Peru and the Waka’ site as well as the helpless plight of the preserve to defend against looters, illegal loggers and the like in this video at the Archaeology Channel.

***Political Archaeology: Iranian artifacts to be looted from The Oriental Institute and Sold?***
In the linked story above, you’ll read of the attempt by attorneys of victims of the 1997 suicide bombing in the Ben Yehuda marketplace in Jerusalem to seize artifacts on loan from Iran in order to sell as a means of compensating for their losses. 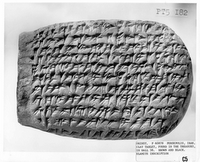 In 2003, U.S. District Judge Ricardo Urbina awarded $425 million in damages to the victims families to be paid by Iran. Obviously, the court had no ability to compel a sovereign nation to pay, so assets within the United States were located and liquidated, including a $400,000 ranch home in Lubbock, TX that once belonged to the shah. Next on the list are the Persepolis tablets, thousands of 2,500 year old unbaked clay tablets from which a wealth of cultural information is being obtained by the Oriental Institute at the University of Chicago.

This is a serious threat to cultural resource management, which could set a dangerous precedent. This is not a house or a boat, or a bank account or some other capitalistic resource of a foreign government. The Persepolis tablets belong to the world. They happen to be curated by the Iranian government, which has extended that curation to an esteemed and respected academic institution. If these precious artifacts are allowed to be looted by the courts and sold, there’s not a government in the world that wouldn’t hesitate to allow their cultural resources to be loaned to our museums and academic institutions. Would Egypt be willing to risk allowing the King Tut artifacts to tour American museums? Would the future government of Iraq allow American universities to examine cultural artifacts from the cradle of civilization? Even in the country? Would such a move make it difficult for American archaeologists to gain access to such sites and obtain permits to excavate?

There’s no denying that the victims and families of the victims of the suicide bombing that occurred in 1997 deserve compensation. There’s no denying that the Iranian government should be required to compensate if they did, indeed, sponsor the terrorists who conducted the bombing. But there is far more at stake in this case than seizing the assets of a foreign nation. Indeed, art and cultural assets should never be subject to such disputes. Nothing good can come from the looting of cultural artifacts, even if the looting is legally sanctioned.