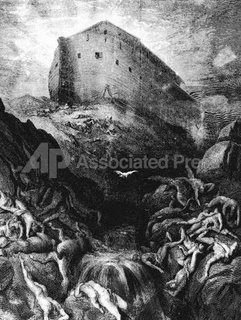 Ed Brayton turned me on to this pseudoarchaeological report in Christian Worldview Network. It would seem that the “expedition” was “[l]ed by explorer, adventurer, and featured Worldview Weekend speaker Dr. Bob Cornuke,” an apparently fake doctor of Lousiana Baptist University â€“a diploma mill as noted by Brayton’s follow-up article, Another Faked Creationist Credential?

This so-called expedition is described by the Christian Worldview Network as:

[A] fourteen man crew [that] consisted of a Who’s Who of business, law, and ministry leaders including Barry Rand (former CEO of Avis), the multiple best-selling author and Christian apologist Josh McDowell, Frank Turek (co-author with Norm Giesler of I Donâ€™t Have Enough Faith to be an Atheist), Boone Powell (former CEO of Baylor Medical Systems), and Arch Bonnema (president of Joshua Financial).

Ed Brayton asked first and I echo the question: where are the archaeologists and geologists? Even from their photos, I can see that we’re looking at natural formations. Cornuke is quoted by the article as saying:

We have no way of confirming for sure that this object is Noahâ€™s Ark, but it is probably the most interesting and baffling object ever found by ark searchers…it sure gets my heart to pumping just thinking of what it could be.â€

I know the article claims he’s a “veteran of nearly 30 expeditions,” but if he finds a basaltic dike “baffling,” he really needs to get out more. Interesting, yes. Baffling, hardly. 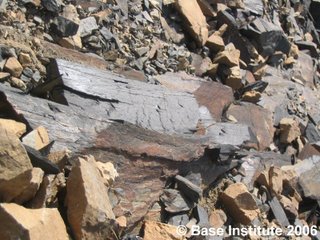 Still, it’s not altogether difficult to understand why people see “design” in nature. ID proponents have been going on and on about this for years. But what “baffles” people like Cornuke about natural structures like basaltic dikes are the angles and form of such geology. A similar reaction is noted in mystery-mongers and significance junkies that claim the beach rock of the so-called Bimini Road are evidence of pavements in antiquity or the undersea geologic formations near Yonaguni evidence for Lemuria. Both features are naturally occurring because of cleavage, jointing, and so on, but people not educated in such processes are easily “baffled” by their appearance. Add to the “mystery” of their form the fact that they’re underwater and the sites become largely inaccessible for skeptics (increasing the mystery); and “proof” that the civilization was of a time long before the stone-age since the land was last above sea level before the last ice-age (increasing the significance).

A similar is being played out in Bosnia in relation to the so-called pyramid “discovered” by Osmanagic. Undo significance has been placed upon the “stone balls” that are found on the landscape local to the “Bosnian Pyramid.” Osmanagic and others claim these are “manmade” and “their existence proves an ancient civilisation existed in todayâ€™s Bosnia.” These are spherulites created through natural volcanic processes and are well documented. In a nutshell, the process involves the cooling and subsequent crystallization of rhyolitic minerals in erupted volcanic flows. Likewise, the alleged “pavement” stones of the site are jointed bedrock very similar in formation to the so-called Bimini Road. These and other features of the site are well-discussed and cited with references at The Hall of Ma’at. I highly recommend reading posts there by Paul H.

Back to the “Noah’s Ark” story: there’s another interesting fallacy that these guys fall into. They note the presence of shells:

Upon being cut open, one of these “rocks” also divulged a marine fissile that could have only originated undersea.
Scouring the mountains all around the object, team participant Steve Crampton found thousands of fossilized sea shells blanketing the landscape. Cornuke brought back a one-inch thick rock slab choked with fossilized clams.

It’s as if they believe that the presence of shells demonstrates that the sea once covered the mountain. In fact, I’m certain this is exactly what they’re implying; never mind the geologic processes that are demonstrated to have occurred (and continue to occur) which uplift and fold strata from sea level to mountainous heights. Indeed, these shells are, as Ed Brayton rightly comments, evidence against their contention that there was a global flood since the shells would be on the mountain instead of in it. Mountain strata the world over show evidence of ancient seashores, beaches and ocean bottoms all lifted high in the air by well understood tectonic processes.

The Worldview Network article on pseudoarchaeology concludes with:

Elvis may have long since left the building, but it looks as if the Ark may have just appeared at the door.

There’s another analogy to Elvis that these pseudoscientists are missing. People continue to claim that Elvis is still alive and sightings of Elvis pop up in popular media from time to time. So is it with this alleged ark. People claim to find it from time to time, but there’s never any real evidence to back their claims. Spurious examples of rocks and shells are used by apologists that seem desperate to justify their superstitions about an ancient cult that believed the world was flooded.

But unlike Elvis, there’s no evidence that the ark ever existed in the first place and a preponderance of evidence which suggests the early Canaanite authors of the Noachian myth took their story from much Earlier Sumerian fictions like Gilgamesh. I wonder if it would have made any difference to the early Canaans if the Gilgamesh epic included a warning that “this story and the cuneiform script are copyrighted and can not be duplicated in whole or part.”

Afarensis posts here about the National Geographic article that ran online for 7/5/06, Noah’s Ark Discovered in Iran? At least they put the appropriate question mark at the end, but continued media attention from institutions like the As
sociated Press and National Geographic is just the sort of thing that pseudoarchaeologists seek. This satisfies their appeals to authority in a most perverse manner, giving them the ability to say: “look what the AP or NG said about us.” Marie Jon, a Christian-conservative writer who writes for Capitolhillcoffeehouse.com, The Daley Times Post, and RenewAmerica.us, wrote on the topic this week in an article titled Noah’s Ark and a Rainbow. The NG article tries to take a neutral stand and offers both credulous and skeptical points of view. As expected, Jon takes a completely credulous perspective.

From National Geographic (after offering up Cornuke and BASE’s press-release version):

Not everyone is convinced by the BASE team’s claims.

Kevin Pickering, a geologist at University College London who specializes in sedimentary rocks, doesn’t think that the ark-like rocks are petrified wood.

“The photos appear to show iron-stained sedimentary rocks, probably thin beds of silicified sandstones and shales, which were most likely laid down in a marine environment a long time ago,” he said.

If the discovery turns out to be the real thing, there will no longer be any excuses to disbelieve God’s Word. We will have the scientific proof needed to quiet the skeptics.

The ACLU, who sues schools over a display of Jesus’ picture, will be beside themselves if the Noah’s Ark story is found to be accurate.