In a recent issue of Atlantis Rising, the ragazine that appeals to the significance-junkie, the mystery-monger, and skeptics like me who are fascinated with the first two, Michael Cremoâ€™s latest column â€œForbidden Archaeologyâ€ highlights a figurine of dubious origin. The article in question is â€œthe mystery of the Nampa image,â€ Atlantis Rising, no. 64, July/August 2007.

According to Cremo, the figurine (dubbed the Nampa Image) was recovered by workers who were drilling a water-well in Nampa, Idaho in 1889. The figurine, about an inch and a half long and made of baked clay was reported to have been recovered by the sand pump from a depth of 300+ feet. Cremoâ€™s account of the â€œartifactâ€™sâ€ discovery is both credulous and inconsistent. Cremo is critical of Michael Brass, who wrote in his book, The Antiquity of Man: Artifactual, Fossil and Gene Records Explored, that it would have been destroyed by the drilling equipment upon retrieval as it was brought up to the surface. Cremo’s response to Brass is that a tube was used after drilling through the lava layer to pump out the sand but, previously, he mentions that the figurine was brought up with a â€œcore sample.â€

This is a small quibble to be sure, but it is relevant since if it were brought up in a core sample, the figurine would be stable and not bumped about. In the tube of sand pump, it would be subject to the laws of physics and knocked around at least enough to pulverize the fragile clay figurine. At the very least, the abrasive effect of the sand in the pump would have rounded it to the point of being unrecognizable to even the most gullible. 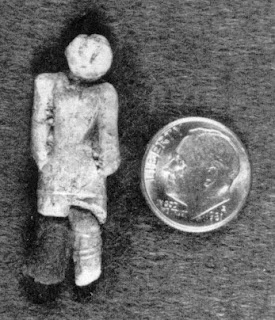 The crux of Cremoâ€™s claim with the figurine is that since it was found in a geologic stratum that was of the Plio-Pleistocene, at a depth of 300 feet, the culture that created it must have been in the region about 2 million years ago. As usual, Cremo is credulous to the point of ignoring any parsimonious or realistic explanation, which makes him the utter laughing stock of real archaeology. Unfortunately, the lay-public, eager for stories of mystery and intrigue, get only a portion of the story when they read his perspective. Cremo says in the article, â€œscientists will go to great lengths to make up some story in order to explain it away,â€ and is critical of more parsimonious and possible explanations as â€œpowers of the imagination!â€ and as â€œspeculative tales.â€ The irony is deep.

What Cremo misses in his account of the â€œNampa image,â€ the little, fragile clay figurine common to the local Native Americans of the late 19th and early 20th centuries, is the voices of reason with regard to the find. More likely, he was aware of them, but cherry-picked which criticisms he would be willing to be counter-critical of. He does make short work of one suggestion that the figurine may have found its way at the stratum naturally through a rock fissure or natural geological process. I agree, the explanation is far from realistic, not to mention the same problem of fragility is encountered as the clay figure makes its way to a depth of 300 feet through a rock crevice or fissure as yet undiscovered or exemplified elsewhere in the Glennâ€™s Ferry formation.

However, there were many criticisms of the object itself, which was heralded by one George Fredrick Wright, an amateur geologist that began as a Christian Darwinist then later turned to active fundamentalist (and was even an author of some of the essays called The Fundamentals, which started and defined this now obnoxious movement of Christianity). Thereâ€™s an added irony that Cremo, an ancient-Earth Vedic creationist is using a young-Earth Christian creationist to make his point of an exaggerated antiquity of man. Cremo cites Wrightâ€™s book, Origin and Antiquity of Man, but makes no mention of Wrights contemporaries who were critical and nearly unanimously dismissive of his work. Indeed, actual geologists and anthropologists of the period remarked that Wright was pseudoscientific:

Dr. Wright’s last example is the feeblest of all-the Nampa image, a “beautifully formed clay image of a female,” said to have been brought up from a depth of 320 feet (!) in the holing of an artesian well, at Nampa, Idaho. It is sad to destroy illusions; but when this same image with its story was laid before a well known government geologist, and he at once recognized it as a clay toy manufactured by the neighboring Pocatello Indians, the person displaying it replied with engaging frankness, “Well, now, don’t give me away!” (Brinton 1892).

And that â€œwell known government geologist?â€ This was J. W. Powell, who wrote in Popular Science Monthly (1893):

In the fall of 1889 the writer visited Boise City, in Idaho. While stopping at a hotel some gentlemen called on him to show him a figurine which they said they had found in sinking an artesian well in the neighborhood at a depth, if I remember rightly, of more than three hundred feet. The figurine is a little image of a man or woman done in clay and baked. It is not more than an inch and a half in length, and is slender and delicate, more delicate than an ordinary clay pipestem, and altogether exceedingly fragile.

Hold the figurine at the height of your eye and let it fall on the hearth at your feet, and it would be shivered into fragments. It was claimed that this figurine had been brought up from the bottom of an artesian well while the men were working, or about the time that they were working at the well, and that as it came out it was discovered.

When this story was told the writer [Powell], he simply jested with those who claimed to have found it. He had known the Indians that live in the neighborhood, had seen their children play with just such figurines, and had no doubt that the little image had lately belonged to some Indian child, and said the same. While stopping at the hotel different persons spoke about it, and it was always passed off as a jest; and various comments were made about it by various people, some of them claiming that it had given them much sport, and that a good many ” tenderfeet” had looked at it and believed it to be genuine; and they seemed rather pleased that I had detected the hoax. When I returned to Washington I related the jest at a dinner table, and afterward it passed out of my mind. In reading Prof. Wright’s second book I had many surprises, but none of them greater than when I discovered that this figurine had fallen into his hands, and that he had actually published it as evidence of the great antiquity of man in the valley of the Snake River.

Consider the circumstances. A fragile toy is buried in the sands and gravels and boulders of a torrential stream. Three hundred feet of materials are accumulated over it from the floods of thousands of years. Then volcanoes burst forth and pour floods of lava over all; and under more than three hundred feet of sands, gravels, clays, and volcanic rocks the fragile figurine remains for centuries, under such magical conditions that the very color of the burning is preserved. Then well-diggers, with a pump drill, hammer and abrade the rocks, and bore a six-inch hole down to this figurine without destroying it, and with a sand-pump bring it to the surface, to be caught by the well-digger; and Prof. Wright believes the story of the figurine, and places it on record in his book!

And Michael Cremo places it on record in his book! Itâ€™s a lengthy quote, but the full context of the account is important. Cremo also cited F.F. Jewett (1890) who described having done â€œexperimentsâ€ on the clay that led him to the conclusions that it â€œmust be of considerable age.â€ What experiments, specifically, arenâ€™t mentioned. But he goes on to declare that â€œthe accumulation of iron upon the grains of sandâ€ canâ€™t be accounted for â€œexcept by supposing to have been the result of slow decomposition of substances containing iron.â€ Perhaps this was the prevailing scientific assessment of the 19th century, but what, precisely, is Cremoâ€™s excuse for failing to recognize that iron oxidation occurs on clay when intentionally fired this way. A process well-known to archaeology and should be understood even for a pseudo-archaeologist.

The â€œNampa imageâ€ is a hoax. Pure and simple. It was presented at a time in which hoaxes were popular and people liked the notoriety. A contemporary of this little figurine is the Cardiff Giant, which was just being exposed for its fraudulent nature at around the time the worker in Nampa, ID claimed to find a modern clay doll in the sediments of a time when people simply didnâ€™t live in North America, much less make fired clay dolls.